On the page, life after prison 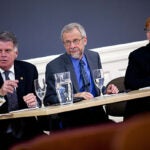 Tayari Jones brought her visceral world to the Radcliffe Gymnasium on Tuesday. The novelist, essayist, and short story writer silenced the crowd with a reading from her forthcoming novel, “Dear History,” in which she explores how the lives of a young married couple are devastated after the husband is wrongly convicted and sent to prison for 25 years.

“One thing you learn in prison is that you don’t know” anything, “or that what you do know is worthless in here, like a bathtub full of pennies,” read Jones, in the words of her ill-fated protagonist, Roy.

Jones strives for the spectrum of human emotion in her work: the funny, the mundane, the brutal, and the believable. “You are not done with the story until you have the full range of human experience in it,” said the associate professor of English at Rutgers University.

During her fellowship year at the Radcliffe Institute for Advanced Study, Jones has been working on her fourth in a series of novels set in her home city of Atlanta, including “Silver Sparrow,” which examines a complicated connection between two sisters, and “Leaving Atlanta,” based on the child murders there in 1979. The physical, social, cultural, and political landscapes of the American South are “constant threads” in her work, she said, as she delves into “deeply personal conversations” and the dramatic intersections of race, class, gender, and religion. The intense personal conversations that unfold on the page often first play out in her imagination, said the author, who fielded questions from the crowd about how she shapes her craft.

“The first scrap of [“Dear History”] … came to me as an imagined argument between a man and a woman. … I overheard a conversation in my mind. … [And] I know that I have a novel when both people have a point.”

For Jones, as significant as a plotline is the question of voice. She often uses a type of mimicry on paper, imitating a character’s speech as a means of helping her understand how they “think and feel,” so she can develop their voice. Establishing an opening voice for her new work took patience and several versions of the same section, she said, as she tried a number of voices while searching for the perfect “Greek chorus of sorts” for the book’s prologue.

“I actually wrote about 10 versions of this prologue … and I kind of imagined that I was allowing the various residents of the town to audition” for the part.

Asked why she often forgoes an all-knowing narrator in her novels, Jones said that by letting her characters articulate their own feelings, she better captures their most intimate moments. She approaches first-person narration with care, noting that the form can sometimes offer the reader a type of overpowering connection. It’s as if the reader becomes “locked in a room with that person,” said Jones, “and there are some people you just don’t want to be locked in a room with.”

She is as intrepid with her plotlines as she is ruthless with her words on the page. With each work she tries to “stare at least one of my fears directly in the face.”  In her new novel, she takes on two: the fear of the African-American middle class that the “specter of mistaken identity is always around the corner,” and the quandary of a woman left on her own, who will have to make her own way and put herself first, or wait patiently for her man.

The question for her protagonist, Celestial, she said, becomes “what happens to a community when women put their own needs in front of the needs of men.”

She said her novels resolve an “emotional question I don’t know the answer to.” When she fails to create that essential emotional tension with her work, she simply lets the idea go, sometimes at the cost of 200 completed pages that are stuffed in a drawer and never used again.

“I never revisit them.”

Like many writers, she still works diligently on a typewriter. The practice helps her to resist the temptation to change and rewrite endlessly, or look for the place to put that perfect word she’s fallen in love with.

“I just go for it, and then I go back and read the pages to see what I have.” She also makes sure to read them aloud to get a sense for the rhythm of the dialogue. “If I can’t say a line of dialogue, then I know the character can’t say it either. … They have to talk like regular people. I want it to feel like eavesdropping.”

Insomnia is the price Jones pays for good writing. The characters, whom she likes to think of as real people, “unruly passengers” in a car that she steers, keep her up at night as she worries incessantly about their futures. Sleep returns, she said, when she resolves their story lines.

“Once I’ve finished that last scene, the way it’s supposed to be done, then I stop thinking about them.”