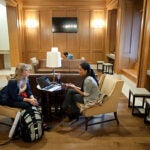 In the spirit of the law

The Office for the Arts at Harvard (OFA) and the Council on the Arts at Harvard, a standing committee of the Faculty of Arts and Sciences, announced the recipients of the annual undergraduate arts prizes for 2012. The awards, presented to more than 100 undergraduates over the past 30 years, recognize outstanding accomplishments in the arts undertaken during a student’s time at Harvard.

Matthew Aucoin ’12 received the Louis Sudler Prize in the Arts. The prize recognizes outstanding artistic talent and achievement in the composition or performance of music, drama, dance, or the visual arts. This prize honors the sum of a student’s artistic activities at Harvard.

An English concentrator and student in Kirkland House, Aucoin has been awarded this prize in recognition of his exceptional and extensive work as a musician, pianist, composer, and conductor. He has ample experience conducting with professional orchestras and professionals in the operatic world, including work with the Orchestra Sinfonica di Milano Giuseppe, and singers Lawrence Brownlee, Takesha Kizart, and Adriana Kucerova.  Additionally, he has served as assistant to Maestro Will Crutchfield and Johannes Debus. He was a recipient of a 2010 Artist Development Fellowship from the OFA, which he used to study conducting at Italy’s La Scala and Maggio Musicale. A promising composer, Aucoin has completed two original operas, one of which, “Hart Crane,” will premiere at the Loeb Drama Center this month. On campus, he serves as an assistant conductor for the Harvard Radcliffe Orchestra and music director for the Dunster House Opera Society, whose spring production featured his original translation of “Le Nozze di Figaro.” Additionally, Aucoin served as poetry editor of the Harvard Advocate, and is the author of a creative thesis, a book of poems advised by Jorie Graham, Boylston Professor of Rhetoric and Oratory, with whom he is currently directing Harvard’s 375th anniversary poetry celebration taking place during the Arts First festival.

A visual and environmental studies (VES) concentrator in Lowell House, Stern has been awarded this prize for her extensive work across sculpture, performance art, design, photography, and mixed- and multimedia installation. She has spent her summers working with various arts organizations, helping to organize the first major exhibition of socially engaged art as an intern at the arts nonprofit CREATIVE TIME, taking fashion design classes at Nuova Accademia di Belle Arti Milano in Milan, and acting as the first student intern at the  Denniston Hill artist residency in upstate New York. On campus, she has worked as a junior research partner at the Radcliffe Institute with art historian Carrie Lambert-Beatty and artist Taylor Davis, researching topics such as the history of Internet art and the intersection of text and image in medieval manuscripts. She has been a proctor for the Freshman Arts Program for four years, and has participated in 10 Harvard Radcliffe Dramatic Club (HRDC) theater productions, working as a sculptural installation artist, poster designer, and scenic designer. She is also currently an arts columnist for the Harvard Crimson. Her work has been featured in the Harvard Advocate, exhibited in Massachusetts Hall, the i-lab, Linden Street Studios, and the Carpenter Center. Stern’s VES thesis focuses on the transmission of identity and manufacturing of persona through fabricated conversations and events. It will be presented in several multimedia video, sound, and text installations at the Carpenter Center for the Visual Arts this spring.

A resident of Mather House concentrating in music, Kramer is awarded this prize for his work in musical theater productions both as an actor and director. He has performed in and/or directed more than 25 productions with Dunster House Opera, the Harvard-Radcliffe Gilbert & Sullivan Players (HRG&SP), the Harvard-Radcliffe Summer Theater, and the HRDC, taking on roles including Dr. Falke in “Die Fledermaus,” Jamie in “The Last Five Years,” and John Wilkes Booth in “Assassins.” He has also directed Dunster House Opera productions of “Albert Herring,” and his and fellow senior Matt Aucoin’s original translation of “Le Nozze di Figaro.” This spring, Kramer will originate the role of Malcolm Cowley in Aucoin’s original opera, “Hart Crane.”

Danielle Drees ’12 and Elizabeth Mak ’12 received the Louise Donovan Award. The award recognizes a Harvard student who has done outstanding work behind the scenes in the arts (e.g., as a producer, accompanist, set designer, or mentor and leader in the undergraduate arts world).

An English concentrator in Leverett House, Drees has been awarded this prize for her complete body of behind-the-scenes work and dedication to improving the overall quality of theater at Harvard. During her four years in the HRDC, Drees has served as a producer, stage manager, dramaturge, venue manager, box office manager, assistant designer, and adviser for more than 30 productions. She was the HRDC’s vice president and mainstage coordinator in 2011, as well as the club’s Experimental Theater coordinator in 2010, during which she oversaw productions in the Loeb Experimental Theater. Drees has also led numerous seminars in stage management and producing for the undergraduate community at Harvard.

A special concentrator in performance and theatre arts in Cabot House, Mak has been awarded this prize for her work in dance and theater as a scenic and lighting designer as well as a variety of stage management and technical support roles. Mak has designed for more than 10 HRDC productions as well as for the American Repertory Theater/Moscow Art Theater School Institute for Advanced Theater Training. She also was lighting intern for the American Repertory Theater’s production of “The Gershwins’ Porgy and Bess.” Additionally, she has worked extensively in the dance community, including productions for the Harvard-Radcliffe Modern Dance Company, Harvard CityStep, and the Harvard Ballet Company. She stage managed the 2010 Arts First Dance Festival as well as three Harvard Dance Program’s Dancers’ Viewpointe concerts. Mak has also worked with the professional theater company Lyric Stage Company of Boston and at the Williamstown Theater Festival.

Merritt Moore ’12 received the Suzanne Farrell Dance Award. Named for the acclaimed dancer and former prima ballerina of New York City Ballet, the prize recognizes a Harvard undergraduate who has demonstrated outstanding artistry in the field of dance.

A December 2011 graduate with a degree in physics, Moore has been an active member of the Harvard dance community, particularly with the Harvard Ballet Company. She was featured in numerous dance concerts on campus, including “American Grace and Momentum” (for which she also served as artistic director) on the Loeb Drama Center Mainstage. She has performed professionally with Boston Ballet and Zurich Ballet Company and just completed an appearance with the Jose Mateo Ballet Theatre. In addition to her performance experience, Moore served on the Harvard Dance Director Search Committee in 2011 and was a member of the Harvard University Committee on the Arts (HUCA).

Anh Lê ’12 received the first Robert E. Levi Prize. This prize has been established to acknowledge a Harvard College senior who has demonstrated outstanding arts management skills over the course of an undergraduate career.  The recipient’s dedication, organizational talent, and creative problem-solving, as well as ability to nurture artistry, have been critical factors in the success of one or more arts organizations and/or projects. The award honors the memory of Robert E. Levi ’33, M.B.A ’35.

A history and literature concentrator in Mather House, Lê has produced the Lowell House Opera, stage managed for the HRG&SP, and managed the Harvard-Radcliffe Collegium Musicum tour. As tour manager, she managed the recent (summer 2011) three-week tour to Germany and Austria for 60 choristers, overseeing a student committee, raising funds, and organizing transportation, lodging, activities, and 10 concerts. She has interned as an arts administrator with the American Repertory Theater and Opera Holland Park during her undergraduate summers. In addition to working in production, Lê is also a classically trained pianist and choral singer.

Ryan Halprin ’12 received the Jonathan Levy Award.  This prize recognizes the most promising undergraduate actor at the College.

A neurobiology concentrator in Lowell House, Halprin is a seasoned performer in both theater and musical theater, and has played roles such as Roy in “Trust,” Hildy Johnson in “The Front Page,” the narrator/mysterious man in “Into the Woods,” and Amos Hart in “Chicago.” He has been a cast member of Hasty Pudding Theatricals since his freshman year, and served as the cast vice president for the organization in 2011-12. Additionally, Halprin is a correspondent for the comedy news show “On Harvard Time” and is a member of Harvard’s Improvisation company, On Thin Ice. This spring Halprin directed and choreographed the Loeb Mainstage production of “Sunday in the Park with George,” choreographed work for the upcoming Harvard Modern Dance Company show “Reconfigured,” and will appear in and direct the upcoming Arts First festival Sunken Garden Children’s Theater production.

Brenda Lin ’12 received the Alan Symonds Award. The Alan Symonds Award, administered by the Office for the Arts and given by the Harvard-Radcliffe Gilbert & Sullivan Players in honor of Alan Symonds ’69-76, HRG&SP alumnus, and former technical director for Harvard College Theatre, recognizes outstanding work in technical theater and commitment to mentoring fellow student technicians.

A neurobiology concentrator living in Lowell House, Lin has been involved as a technical designer for 12 productions during her time at Harvard, including serving as the set designer for “The Spanish Tragedy” in Farkas Hall (formerly New College Theatre) and “Dracula” in the Loeb Ex. In addition to her experience as a designer, she has served on the technical staffs of more than 20 productions at Harvard. In 2010, Lin was elected to the board of the HRDC, and served as technical liaison. She is the assistant to Loeb Technical Director Michael Griggs and has also been a member of the design boards of the Harvard Science Review and Harvard Brain magazine. She is currently designing the set for Matt Aucoin’s opera “Hart Crane,” which will premiere on the Loeb Mainstage this month.