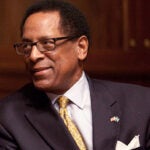 Richard A. Meserve, J.D. ’75, president of the Carnegie Institution for Science and former head of the U.S. Nuclear Regulatory Commission, has been elected president of Harvard’s Board of Overseers for 2012-13.

Both Meserve and Fisher will be serving the final year of their six-year Overseer terms in 2012-13.  They will assume their new roles following Commencement this spring, succeeding Leila Fawaz, A.M. ’72, Ph.D. ’79, the Issam M. Fares Professor of Lebanese and Eastern Mediterranean Studies at Tufts University, and Robert N. Shapiro ’72, J.D. ’78, a partner in the Boston-based law firm of Ropes & Gray.

“The Overseers bring essential experience and wisdom to the work of the University, and their perspectives assure that Harvard moves ahead with both ambition and care,” said President Drew Faust. “With Dick Meserve and Lucy Fisher, we’re once again fortunate to have two alumni leaders of remarkable accomplishment and strongly complementary backgrounds to guide the board forward during the coming year.”

Richard Meserve has been president of the Carnegie Institution for Science since 2003. Based in Washington, D.C., the institution is an internationally recognized scientific research organization with programs in developmental biology, plant biology, earth and planetary sciences, astronomy, and global ecology.

From 1999 to 2003, Meserve was chairman of the Nuclear Regulatory Commission. In that role, he served as the principal executive officer of the federal agency with responsibility for ensuring public health and safety in the operation of nuclear power plants and the usage of nuclear materials.

From 1984 to 1999, Meserve was a partner in the Washington-based law firm of Covington & Burling, with a practice focused on issues at the intersection of law, science, and public policy. He remains senior of counsel to the firm, which he joined as an associate in 1981.

After his undergraduate studies at Tufts University, Meserve received his J.D. degree from Harvard in 1975 and a Ph.D. in applied physics from Stanford University in 1976. He clerked for Justice Benjamin Kaplan of the Massachusetts Supreme Judicial Court and for Justice Harry A. Blackmun of the U.S. Supreme Court before serving as legal counsel to President Jimmy Carter’s science and technology adviser.

Lucy Fisher is co-head of Red Wagon Entertainment, an independent film production company based in California.  Red Wagon’s projects include such motion pictures as “Stuart Little 2” and “Memoirs of a Geisha,” as well as the Prohibition drama “Lawless” and “The Great Gatsby,” directed by Baz Luhrmann and starring Leonardo DiCaprio; the latter two films are scheduled for release this year.

Previously, Fisher served as vice chair of the Columbia TriStar Motion Picture Group at Sony Pictures, where she supervised such films as “Men In Black,” “Jerry Maguire,” “Air Force One,” and  “As Good As It Gets.”  The studio set box office records during her tenure.  From 1981 to 1996, she served as executive vice president for worldwide production at Warner Bros., overseeing a wide range of films, including “The Color Purple,” “Malcolm X,” and “The Fugitive.”

Fisher’s honors include the Producers Guild of America’s David O. Selznick Achievement Award in Theatrical Motion Pictures, the Hollywood Film Festival Award for Producer of the Year, Women in Film’s Crystal Award, and Premiere magazine’s Icon Award.  She has been listed as one of Fortune magazine’s 50 most powerful women in American business.

Fisher and her husband and professional partner Douglas Wick co-founded CuresNow, an organization dedicated to promoting regenerative medicine and stem cell research, after their daughter was diagnosed with type 1 diabetes.  They co-chaired the campaign for the California Stem Cell Research and Cures Initiative, which was passed by California voters in 2004 and led to major new funding for stem cell research in the state.

As a Harvard Overseer, Fisher is vice chair of the standing committee on humanities and arts and serves on the executive committee and the committee on institutional policy.  A member of the visiting committees to Harvard College, the Graduate School of Education, and the Department of Visual and Environmental Studies, she is also a member of the advisory committee to the Office for the Arts and founder of the Peter Ivers Visiting Artist program, which annually brings newer artists to the campus.

First created as the “Committee as to the colledg at New Towne” by order of the General Court of the Colony of Massachusetts Bay in 1637, the Board of Overseers dates to the earliest days of Harvard College.  It is the larger of Harvard’s two governing boards, the other being the President and Fellows of Harvard College (also known as the Harvard Corporation).  Members of the Board of Overseers are elected annually by holders of Harvard degrees; typically, five Overseers are elected each year to six-year terms.  Drawing on the diverse experience of its members, the board exerts broad influence over Harvard’s strategic directions, provides counsel to the University’s leadership on priorities and plans, has the power of consent to certain actions of the Corporation, and directs the visitation process by which various Harvard Schools and departments are periodically reviewed and assessed.