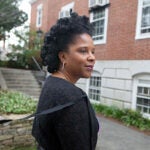 On the page, life after prison

It would be hard to find a more witty, urbane, and insightful literary guest at Harvard than British writer Ian McEwan, whose novel “Amsterdam” (1998) won the Man Booker Prize, and whose “Atonement” (2001) was made into an Oscar-winning film.

McEwan held an audience in thrall at Paine Hall Tuesday during an exploration of realism and its pitfalls in the creative process.

McEwan has avoided magical realism in his work, saying, “All my writing life, I have refused to give my characters wings.” But hewing to realism can sometimes trip up a writer who delves, without true expertise perhaps, into the arcana of medicine, astronomy, and even auto mechanics.

His lecture, “The Lever: Where Novelists Stand to Move the World,” was the inaugural event in a new series funded by the Rita E. Hauser Forum at the Mahindra Humanities Center at Harvard.

The lever, McEwan explained, is one of the six “simple machines” revered by Renaissance science. (The others are the screw, pulley, inclined plane, wedge, and wheel and axle.) But the lever, described by the Greek scientist Archimedes in the third century BCE, seems to have special resonance for writers of modern realism. “Give me a place to stand, and I will move the Earth,” Archimedes said. And where else is the fact-bound novelist to stand, McEwan said, if not on the Earth?

But facts are the rub. They may find their way into novels slightly askew, and readers with special expertise lead hapless writers back to reality. The Harvard lecture, McEwan promised, would be an accounting of “all the mistakes I have ever made in fiction” — including the letters from readers eager to correct him.

He read passages from his fiction, evocations of places and people that seemed like dreams borne along on a carpet of facts. McEwan interleaved these selections with the dry, droll, detailed — and occasionally scolding — responses they elicited from expert readers.

In “The Comfort of Strangers” (1981), he related, one character gazes out at a summer night sky in Venice and muses about the constellation Orion. After the novel was published, McEwan got a letter from the euphoniously named Felicity Belfield, an amateur astronomer from the Isle of Sark. “If you want to see Orion in the summer,” she wrote, “you must go to New Zealand.” He was chagrined, McEwan said. “I never knew I was turning the heavens around.”

Then again, he added, some mistakes should never be changed. Alfred Lord Tennyson, who had never seen a train before, described his first nighttime ride as “ringing down the grooves of change.” It is musical and symbolically apt but technically wrong. (Trains ride on the top of rails and not in grooves.)

Other writers couldn’t care less, said McEwan. He cited a poem that mistakenly located penguins on a South African shoreline. “In my poem,” the poet said, “those penguins are there.”

Then there was British writer William Golding, a Nobel laureate who was badgered for decades — often by schoolboys — regarding Piggy’s glasses in his celebrated novel “Lord of the Flies” (1954). If the spectacles corrected for farsightedness, and were therefore concave and spread light, how could they be used to start a fire? That hectoring science question, said McEwan, “was the burden of Golding’s life.”

After McEwan wrote “Atonement,” a miffed artillery veteran of World War II wrote to point out that “on the double” was an Americanism, and that British soldiers of his day would have said “at the double.” Other mistakes can be “driven by sheer desire,” said McEwan. In a draft passage of his novel “Saturday” (2005), he had a neurosurgeon use a paintbrush, artistlike, to apply Betadine on a shaven skull. The fanciful image — off-key since you can’t autoclave a paintbrush — earned the novelist a reproving response from the physician-expert he had spent two years observing.

Still other mistakes can lead to friendships of a sort, said McEwan. In “Saturday” he described a Mercedes Benz S500 as having a clutch, which it does not. That gaffe prompted a detailed reply from a “motoring journalist,” who characterized a mechanical gearbox as a “crude proletarian device” that would never appear in a car of this stature. A correspondence ensued. In the end, McEwan — then driving a 17-year-old car — knew just what to buy next.

Over time, his interchanges with fact-sensitive readers became “a high form of engagement,” he said. The writers might be professional fact checkers, schoolboys, or just scolds, said McEwan, but “they knew the air of reality, the solidity of specification, is among the supreme virtues of the novel.”

This contact with readers also reminded him of the human desire to break out of fiction’s collectivization of experience. “When Felicity Belfield writes me,” said McEwan tenderly, “she’s offering to add her own weight to my lever … and help me move the world by means of the high artifice of realism.”