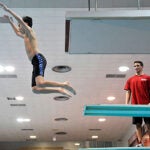 In the swim of things

In embracing a new form, student relearned the joy of playing

It’s not uncommon for people to look at my involvement with mariachi and wonder how a Chinese-American like me found his way into a Mexican folk band. And while it’s certainly a testament to the incredible cultural diversity here at Harvard, my story with mariachi goes deeper than what meets the eye. It wasn’t until I learned to embrace mariachi that I began to truly understand the joys of being a musician.

Before coming to Harvard, I played trumpet for many years in wind ensembles, brass quintets, and symphonic orchestras.  I felt most comfortable when performing from pages of music resting on a stand in front of me — crisp, well-ordered pages containing the storied artistry of musicians from ages past. I was a successful trumpet player in a well-respected genre of music, and that should have been enough for me — or so I thought. But the accolades gradually lost their luster as the continuous cycle of competitions wore on.

The same pages of music that I once sought refuge in became prison-like as I found that any deviation from the composer’s markings was expressly discouraged. Yet because I had spent my career as a classical musician, I trudged onward.

As a trumpet player, I had tangentially heard of mariachi bands. To me, they personified your typical birthday band that existed solely to entertain, bringing to mind images of gaudy outfits and tequila-induced wailing. Despite my skepticism toward the genre, I auditioned for the student group Mariachi Véritas de Harvard in my freshman year, thinking it would be a fun, quirky addition to my University experience. I spent my first weeks in the group showing off, taking every opportunity to exert my superiority as a classical musician.

Fast-forward three months. The group had managed to save just enough money to travel to San Antonio for an annual festival hosted by “El Mejor Mariachi del Mundo,” Mariachi Vargas. During a series of instructional workshops with the members of Vargas, I was able to meet the principal trumpet player of the group, Gustavo Alvarado, who graciously offered me a private lesson.

Upon entering Gustavo’s hotel room that afternoon, I was greeted by none other than Victor “Pato” Cardenas, perhaps the most famous ever master of the vihuela (a guitar-like instrument), sprawled across his bed, with a small stack of snacks laid neatly in front of him. As a cheesy soap opera on Telemundo buzzed in the background, Gustavo asked me to “take out my trumpet” and warm up.

Gustavo guided me through a few exercises aimed to develop my “mariachi sound,” incorporating techniques not found in the traditional classical style. I followed his instructions carefully, but it wasn’t long before he yanked the trumpet off my lips. He licked his chops and began to demonstrate the proper mariachi sound.

I soon realized that I was in the presence of one of the world’s most talented trumpet players.

As I left the room, the clarity, resonance, and refinement of Gustavo’s sound continued to ring in my mind. I found myself in a dizzying state of inspiration and yearned to return home and practice. It was a liberating feeling that brought back memories of my first moments holding a trumpet. If a trumpet player in a so-called “birthday band” could become so accomplished, did it really matter what his medium of performance was? I strove to learn how to make music come to life just as Gustavo did, music that I was determined to bring back to audiences at Harvard.

As my mindset shifted, my eyes opened to the amazing things that I had been missing out on in my own mariachi. I noticed that we had musicians who were equally talented vocalists as they were instrumentalists. I noticed how some members knew the genre so well that they could memorize entire pieces after only a single run-through. I noticed how passionate every member was, and I realized that I was the last to arrive at the party.

It was at Harvard that I discovered a more fulfilling purpose to playing music. I joined the mariachi on a whim, but the experience could not have been more life-changing for me. Music has taken on a whole new meaning these three years I’ve performed with the mariachi, and I’ve since been able to reap the full enjoyment of musical performance at Harvard and around the country.  It’s the way of life of a mariachi musician, and I wouldn’t have it any other way.