In the spirit of the law 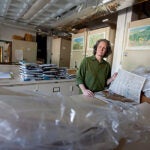 At Herbaria, a new career blossoms

On their campus of old, Harvard Law School (HLS) students scrounged for meeting space, searching for quiet corners or tucked away nooks, occasionally sacrificing their bodies for the few coveted spaces available for group discussions.

“People would throw themselves across the couches in Pound Hall to reserve them,” recalled third-year law student Ellen Wheeler. “Before, if you could find space, it was like the Holy Grail.”

Some determined students braved the din of Harkness Commons and its busy lunchtime crowd, but the bustling dining hall didn’t lend itself to discussions about complicated cases or legal statutes. Others students settled for seats on the floor of a building’s hallway; some simply met off campus.

Now, they don’t have to.

Last fall the School opened its newest building, 250,000 square feet aimed at bringing faculty and students closer. Its design, developed in close collaboration with HLS community residents and neighbors and realized by the architectural firm Robert A.M. Stern Architects, grew out of a strategic plan crafted in 2000, with the primary goal of improving the overall student experience.

“There was a real sense that the student environment could be improved,” said Story Professor of Law Daniel Meltzer, faculty chair of the 2000 planning committee. In the past, he said, some student-run journals were housed in converted basement closets, and the School’s student organizations and its clinical programs were scattered among HLS buildings. The campus was also missing an expansive space in which students could “hang out.”

“The campus lacked a physical nucleus,” said Meltzer, “where students would run into each other, study together, and have fun together.”

The new Wasserstein Hall, Caspersen Student Center, and Clinical Wing building includes new classrooms and learning spaces of varying sizes equipped with the latest technology, meeting spaces, a sizable lounge, and offices for the School’s student-led organizations, journals, and clinical programs. There’s even a pub. The project had a sustainable mandate, and the complex recently received LEED Gold Certification from the U.S. Green Building Council.

“The way the building is designed has made running into friends and bumping into people in organizations that you might want to collaborate with much more frequent,” said Abram Orlansky, a third-year student and a member of several student organizations.

The effect of the new setup was evident on a warm spring afternoon that drew crowds of students to a courtyard on the building’s second floor, where tables were filled with study groups reviewing cases, or students were grabbing an outdoor lunch.

The garden space is part of the building’s Milstein Conference Center, funded by HLS alumni Howard P. Milstein and his wife Abby, which includes an expansive, adjacent conference room.

“The new center will facilitate gatherings and become a true focal point for the Harvard Law School community and the broader Harvard community, bringing together students, faculty and guests in an inspiring and beautiful space,” said Milstein.

Downstairs, others relaxed in the student center’s vaulted Robert B. and Candice J. Haas Lounge, complete with comfortable chairs, couches, and two fireplaces, or next door in the building’s pub painted from floor to ceiling in a deep red hue and covered with pictures of famous HLS alumni.

The complex’s student center unites the School’s 84 student-run organizations and 16 of its 17 student-operated law journals under one roof, affording them airy, open offices and the chance to interact in common spaces.

“As opposed to just trying to send emails” to connect with people, said Wheeler, co-editor in chief of the Harvard Negotiation Law Review, “if I come here during the week, I know everyone will be here.”

The same is true for the Clinical Wing, which houses most of the School’s extensive clinical programs.

“It integrates the clinics more into the daily operation of the School,” HLS Dean of Students Ellen Cosgrove said of the new wing. “Having them in the same building as many of the classrooms allows for interaction between the clinical and the teaching faculty, as well as interaction between students.”

“The place is just hopping,” said Meltzer. “I have had any number of students say to me, ‘Where was everybody before this?’”

The new complex also addresses a change in curriculum. In the same 2000 strategic plan, administrators agreed to reduce the first-year sections of 140 students each to 80 students. A curricular reform in 2005, led by Professor Martha Minow, now HLS dean, introduced a number of courses, electives, and workshops designed for smaller classes.

The Wasserstein Hall classrooms resemble those of Harvard Business School, with a horseshoe shape with the teacher at the front, but some have an added feature. Two classrooms are equipped with swiveling chairs that allow students to face each other for breakout discussions in class.

The move toward more interaction was done as with an eye to promoting team learning, something that will better prepare graduates for the changing nature of the profession, where team players rank high on the wish list of hiring firms. Practicing lawyers regularly complain that the notion of working in teams isn’t emphasized enough in current legal pedagogy, said Meltzer.

“They want employees who can come to them knowing how to work with someone else to improve upon each other’s ideas, how to disagree, and how to generate a group product that is better than anything that could be produced individually, and we think the new complex will encourage that.”