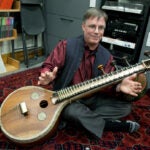 Getting students to perform

It sounds like a story nearly all elementary schoolchildren can tell: A group of colonists, many of them simple farmers fed up with being unfairly taxed and ruled by a sovereign thousands of miles away, rises up against their colonizers, earning the right to rule themselves.

It may sound like the American Revolution, but this story takes place almost a century before the first shots were fired at the battles of Lexington and Concord.

As told in “Revolt: An Archaeological History of Pueblo Resistance and Revitalization in 17th Century New Mexico,” a new book by Assistant Professor of Anthropology Matthew Liebmann, it’s the story of the Pueblo Revolt, the most renowned colonial uprising in the history of the American Southwest.

Unlike most histories of the revolt, which typically focus only on the colonial period just before the uprising and the Spanish return to the region a dozen years later, Liebmann’s book offers a first-of-its-kind look at how the Pueblo people lived during their independence.

“There have been histories written about this period, but I call them bookend histories,” Liebmann said. “What my research does is fill in the gaps by studying the archaeological record, because the Pueblos didn’t keep written records during this period.”

Working in close collaboration with the Pueblo people who still live in the area, Liebmann spent years gathering artifacts, producing maps, and using ground-penetrating radar to examine four villages in the Jemez Valley of New Mexico, located about an hour northwest of Albuquerque.

“What I would contend is that although there are elements of them turning toward this ancient past, there are a lot of new elements there as well,” Liebmann said, pointing to depictions of Mary, mother of Jesus, as a “kachina,” or native spirit being, and the use of some Christian iconography.

“The whole revolt fits into the rubric of a revitalization movement,” he continued. “This is a type of recurring event in human history in which a charismatic leader emerges and preaches a message of profound change, or a new way to live life, and as that message spreads you see a rapid shift in the culture.

“This is a model that fits with the establishment of most of the major religions, including Christianity, Buddhism, and Islam, and I would argue that the Pueblo Revolt fits this model as well,” Liebmann added. “Most of the literature in anthropology is focused on what causes these movements, but what I’m interested in is what comes afterwards.

“We know these movements happen, but archaeologists haven’t really identified too many of these in the archaeological record. One of the goals of my research was to take a historically documented revitalization movement and identify an ‘archaeological signature’ for it, which other researchers can use to determine if other sites may fit into these types of movements.”