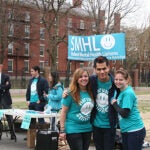 “Green is the new crimson” is often heard in classrooms, dorms, and offices but the Harvard community comes together only once a year to recognize the behind-the-scenes hard work inspired by that motto.

On Thursday, hundreds of staff, students, and faculty gathered to recognize more than 60 individual and team winners at the third annual Green Carpet Awards hosted by the Office for Sustainability. The awards celebrate work toward the University’s on-campus sustainability initiatives, including the goal to reduce greenhouse gas emissions 30 percent by 2016.

“I’m proud that sustainability is a goal that continues to unify us as one Harvard,” said President Drew Faust in a welcome message delivered by video to attendees and award winners. “You have demonstrated that supporting the environment ultimately supports our research and teaching mission by conserving resources, increasing efficiency, and reducing costs.”

First up were 63 Individual Achievement Award winners from Harvard’s 12 Schools and administrative units. Winners were called to the stage to receive plaques according to four themes: optimizers, innovators, educators, and influencers. Students were recognized for launching new events such as the Green Brain Break, which attracted more than 1,200 freshmen. Employees who lead Green Team efforts in their workplaces were lauded for their “tireless devotion month after month to seeing our community improve.”

Witty commentary by College senior and MC Pete Davis (the brains behind the Harvard Thinks Big series) as well as musical performances by Cowgill, a band made up of Harvard Graduate School of Design and Graduate School of Arts and Sciences students, and THUD (The Harvard Undergraduate Drummers) punctuated the awards presentations and contributed to a fun, energetic atmosphere.

Harvard Kennedy School alumnus Lester Brown, M.P.A. ’62, received the first-ever Distinguished Service Award. Brown, who was introduced by Professor Jim McCarthy as an “environmental Paul Revere,” spoke for several minutes about trends that have contributed to a reduction in carbon dioxide emissions in the United States after a peak in 2007. He also painted an optimistic picture for reaching aggressive reductions in carbon emissions, as much as 40 percent from 2007 levels, by 2020.

Among the developments cited by Brown: the closing of 106 of 492 coal-fired power plants in the United States and a decline in gasoline use because of what he called the “demographics of gas consumption.” While younger people are no longer “addicted to cars,” the retirement of baby boomers has also contributed to the drop in gasoline use. Retirees generally use 30-50 percent less gas because they are no longer commuting.

Brown finished by thanking the Harvard community for the “extraordinary range of efforts on campus” and encouraged students to continue to be engaged in environmental issues such as the elimination of bottled water on campus. “We have to change the system and fundamentally restructure our economy,” Brown said.

Team Project Awards were given out to student and staff teams in five categories.

The afternoon ended with the presentation of the Spengler-Vautin Special Achievement Award winners. The award was created to acknowledge that partnerships among faculty, students, and administrative staff are key to making progress on Harvard’s sustainability goals. This year’s winners were Frederick Abernathy, the Gordon McKay Professor of Mechanical Engineering and Abbott and James Lawrence Research Professor of Engineering at the School of Engineering and Applied Sciences, and Rob Gogan, manager of recycling and waste at Campus Services.

“Whether we are teaching, learning, conducting research, or taking action to make our office a greener place, each one of us has an important role to play,” said Vice President for Campus Services Lisa Hogarty in closing remarks.