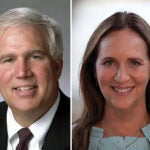 Faculty, students, and staff gathered at the Charles Hotel in Cambridge on Thursday to honor Emmy Award-winning producer Rebecca Eaton and Harvard undergraduate Naseemah Mohamed ’12, the recipients of the 2012 Women’s Leadership Awards. The ceremony and dinner, coordinated by the Harvard College Women’s Center, promotes awareness of women’s and gender issues, and supports “contributions by women that challenge, motivate, and inspire.”

Eaton, executive producer of the public broadcasting series “Masterpiece,” accepted the Women’s Professional Achievement Award. She expressed her gratitude for the honor, but joked that she knew that she was really invited because the crowd “wanted to hear about the hit drama ‘Downton Abbey.’” (Season 3 is in production, she said. It will be 10 hours long and air in the U.K. in September.)

Turning serious, Eaton said that there was something odd about speaking to undergraduates about leadership because she felt closer to their age than hers (64).

Eaton cited three women who have shaped her life: her mother, her daughter Katherine, and actress (and fellow Vassar College alumna) Meryl Streep.

“My mother was an actress in the ’30s and didn’t marry until she was 37,” Eaton said. “The message she gave to me was ‘always have a job.’ Have something you can do by yourself that sustains you. My daughter taught me that I can’t control everything. Despite all my efforts to make her exactly like me, she is her own person. Meryl Streep has weathered the age thing. She does comedy, movies, and theater. She has a gigantic element of gaiety. I love her joie de vivre.”

Eaton offered five pieces of advice that she would give her daughter, “if she would listen to me.” She told undergraduates not to panic about the economy. “The world needs you and will find you,” she said. She advised students to “keep an eye out for omens,” and to be open to things that might send them in new directions. “Make something — don’t just market something,” was her next piece of wisdom. In an age of constant information flow, Eaton urged students to “find enough silence to hear yourself think and to allow something new to come up.” “Hold your friends close,” she added. “The friends you have now will be with you forever.”

Her final tip was perhaps her most important, she said.

“Please don’t wear impossibly high-heeled shoes,” she said, provoking laughter and applause from the audience. “You’ll twist your ankle and have a bad ankle for the rest of your life. Just don’t do it!”

Senior Mohamed, the recipient of the undergraduate Women’s Leadership Award, boasts a dizzying array of accomplishments, including: president of Harvard African Students Association; co-director of the Pan-African Dance and Music Ensemble; chair of the African Union of the Harvard Model Congress; and author of articles and book reviews. Perhaps most remarkably, Mohamed created a successful arts-based literacy program for an impoverished high school in her hometown of Bulawayo, Zimbabwe.

She said that she was humbled not only to be in the company of a group of women who “are already changing the world,” but also to think of those who made it possible for her to change her life: the teacher who encouraged her to apply to an international debate exchange program in the United States; the host family that offered to pay for her prep school education; faculty mentors at Harvard who guided her studies. Their examples, Mohamed said, taught her that leadership should be about empowering and uplifting others.

“You never really know who has potential,” she said. “Oftentimes, the structure we give to what leadership is takes away from the way we can change the lives of others. For me true leadership … comes with giving a person hope. It’s the teacher who believed in me even when others didn’t.”

Mohamed went on to say that, although she was honored to receive the undergraduate award, she believed that leadership was a journey, and that she has a long way to go.

Harvard College Dean Evelynn M. Hammonds opened the celebration with thanks to the staff of Harvard’s Women’s Center for organizing the event, and with words of praise for Mohamed.

“Her leadership and love of learning have made her an example to all,” Hammonds said, “especially the future scholars of Zimbabwe.”

Hammonds called Eaton “a vanguard of the arts,” and thanked her for her work and presence at the awards.

“This year’s group is so interesting,” she said. “On the one hand, there’s a woman from the developing world who got an incredible opportunity and ran with it and is going to be a tremendous leader in the future. And on the other hand, you have a woman who’s been at WGBH for 41 years and has built an incredible brand that I don’t think anyone could have envisioned. It’s exciting to see two different paradigms of leadership. I’m very happy with this year’s recipients.”