Earth’s sister in the crosshairs 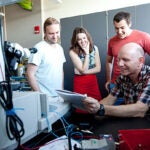 Astronomer, author says an extrasolar planet like ours will be found by 2014

Earth’s sister is out there, somewhere, and scientists searching for planets that may support life believe they are closing in on finding just that.

“Maybe this year, maybe next — before 2014,” predicted Harvard astronomer Dimitar Sasselov, head of Harvard’s Origins of Life Initiative and co-investigator on the planet-finding Kepler Space Telescope.

Sasselov’s prediction may seem bold to those who have not been following the avalanche of new findings in the search for planets circling other stars. From the barest trickle in the mid-1990s, the discovery of extrasolar planets, or exoplanets, has rapidly increased as astronomers have developed new techniques and deployed new instruments, including the 2009 launch of Kepler, specifically designed to find planets around other stars.

The telescope already has located more than 2,300 candidate planets, of which 61 have been confirmed as actual planets. Researchers using other telescopes have confirmed hundreds more. The emerging picture is of a universe not only rich in planets, but one with millions circling in their stars’ “Goldilocks Zone,” an orbit not too hot and not too cold where liquid water could support the conditions of life. The most interesting of the planets found in stars’ habitable zones are called “super-Earths,” the rocky or water-covered bodies with a mass of up to 10 times that of Earth.

Sasselov explores the emerging science surrounding super-Earths in a book released this year called “The Life of Super-Earths: How the Hunt for Alien Worlds and Artificial Cells will Revolutionize Life on Our Planet.”

In an interview, Sasselov said the idea for the book came from his work on the Origins of Life Initiative and the undergraduate class he co-teaches with Andrew Knoll, Fisher Professor of Natural History and professor of Earth and planetary sciences. The class, “Life as a Planetary Phenomenon,” has grown each year, nearing 400 students this year. The initiative, the class, and the book all examine life and its place in the universe from the perspective of two disciplines that are not normally considered complementary: astronomy and biology.

The book, aimed at the general public and students without a science background, gives a brief history of the investigations that brought exoplanet and origins-of-life research to where they are today and provides a broad outline of the idea that life is part of the natural evolution of planets under certain conditions.

“From that cosmic perspective, one can look at life as a process that can occur in specific conditions in the universe with specific chemistry,” Sasselov said.

Harvard scientists have played a key role in the search for planets around other stars and have done important work concerning the molecules of life and the formation of early cells. Together, experts in the two fields are seeking to understand the geochemical processes and environmental conditions under which life arises in the universe.

Sasselov talks about this new union of biology and astronomy in his book, saying that for the first time researchers are understanding that life, rather than being a rare cosmic accident, layered onto a planet but apart from its physical processes, might actually be part of a continuous process of planet formation and evolution. In this new understanding, life is a natural — and perhaps common — outgrowth of geology, chemistry, and other processes, linked rather than separate.

“We always thought of life as being this odd phenomenon that is on the Earth rather than of the planet,” Sasselov said.

One dramatic example of life as a planetary phenomenon occurred here on Earth billions of years ago when single-celled organisms developed photosynthesis, consuming carbon dioxide in the atmosphere and giving off oxygen to create the atmosphere that we know today.

Astronomers can help biologists by sharing findings from space, Sasselov said. Using advanced techniques, they can determine the composition of exoplanets’ atmospheres. Once sister Earths are found, their atmospheres can be examined and those results given to biologists to further inform their search for the conditions under which life began.

By extending his search for new planets to include the search for life, Sasselov said he has refreshed his own work. The new focus has forced him to learn more about biology and chemistry and given him new perspectives on old problems.

“Astronomy didn’t care much about biology. For me, it’s been a great career reinvigoration,” Sasselov said. “You can question a lot of different things when you look at something from a new perspective.”