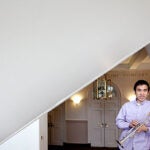 Pay some attention to that cast behind the curtain

This year, Cabot seniors Andrew Howe and Ian Merrifield continued her tradition and will produce and direct “The Wizard of Oz.” For many entertainment groups on campus, the stage in the Cabot Junior Common Room has become a popular performance space. On April 20, 21, and April 26-28, this active spot will feature a production that is a tribute to Livingston’s memory

The making of Oz