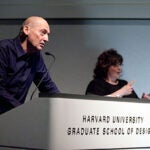 When Jonathan Hansen landed in Cuba in 2005, he wanted to see the country the way Columbus had first viewed it in 1494, via ship. Slowly cruising into port on a Navy vessel, Hansen’s dream was fully realized, and the scholar was awestruck by the beauty, and the baseness, of Guantánamo Bay.

“It’s surreal,” said Hansen, a lecturer on social studies. “In an unusually rainy October, this desert environment was in full bloom, full of birds and wildlife, fish and shells …  truly a natural wonder. The bay itself sits in a bigger basin and gives the impression of almost being infinite. The bay is a natural anchorage, vast and deep, with a succession of fingerlike promontories lining the southeast harbor, the heart of the current naval base.”

A little more inland, there are neighborhoods, shopping centers, golf courses, ball fields, and outdoor cinemas. “It felt weird,” he said. “I came down expecting to come face to face with torture, and what I found was an American suburb — in communist Cuba!”

Hansen was on the first of a handful of visits to the naval base and notorious detention center to research what would become his new book, “Guantánamo: An American History.” It all started with an op-ed in The New York Times that contested the Bush administration’s claim that the bay was sovereign territory of Cuba and hence outside U.S. constitutional jurisdiction — the grounds by which the administration justified “enhanced interrogations” in the wake of the 9/11 terror attacks. “Friends who read the article said to me, ‘Keep going, don’t stop, write a book,’ and so I just went for it,” said Hansen.

But Hansen’s book doesn’t just regurgitate the scandal, it uncovers the deep history of Guantánamo Bay — how it came to be, and how we came to be there.

“The more I learned about Guantánamo, the clearer it became that the stuff that’s happened in the last 10 years can only be understood if you go way back,” he said. “In 1898, Americans intervened in a colonial struggle that was all but won, thus transforming the Cuban War of Independence into the Spanish-American War. We then occupied Cuba for three years, forced Cuba to adopt the Platt Amendment, which guaranteed the U.S. the right to intervene at will in Cuban affairs and to buy or lease naval stations.”

With an American authority established, some 44,000 American citizens flooded Cuba in the early 20th century, said Hansen, snatching up much of the best land and establishing immense sugar plantations. “In the ’40s, ’50s, and ’60s, Guantánamo became popular as a place where relatively humble military and civilian personnel and their families could fulfill the American dream. Help was cheap. The living was easy. The kids were safe. The base was the ultimate gated community.”

Having learned Spanish to complete the book, Hansen is back with the same tutor, at work on a new project that will return him to Cuba. “I’m writing a biography of Fidel Castro,” he said. “My latest book has introduced me to a new world that I’m not quite ready to give up. ”

As for the future of Guantánamo? “There’s 171 prisoners left there now,” said Hansen. “No one will take them, and we don’t want them.”

In fact, Hansen said, the Guantánamo prison enjoys more popular and political support today than at any time in its 10-year history. In a January op-ed for The New York Times, Hansen argued that the United States should give the land back to Cuba. And if President Barack Obama lands a second term and makes good on his campaign promise to shutter the facility, that could be in the cards. For now, Hansen said, “There’s just no telling what’s going to happen to the prison and the U.S. base.”