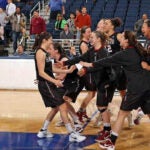 The gift, which underscores the O’Donnells’ confidence in what they call the “superb leadership” of President Drew Faust and the School deans, will support Harvard’s long-term mission as planning continues for an eventual University-wide campaign. The O’Donnells hope that their gift will spur others to give early in an effort to help shape the University’s future.

For Joe O’Donnell, this latest leg in his nearly five-decade association with Harvard is the culmination of a journey that led him from the streets of Everett, Mass., to the classrooms and athletic fields of the Ivy League. After graduating from Harvard College and Harvard Business School (HBS), he maintained close contact with the University, including a stint as an associate dean at HBS, where he worked closely with future dean John McArthur. O’Donnell has been an active volunteer ever since.

“Harvard has played a very important role in my life,” O’Donnell said. “Kathy and I are pleased to have this opportunity to support Drew and the deans as they guide the University forward. We hope that our gift will encourage others to do the same.” He added, “We’ve reached a significant moment in Harvard’s long history, and what we do today will, in large measure, enable the University to expand its critical work in the years ahead — not only in Cambridge but also globally.”

“We’re truly excited about this gift,” said Kathy O’Donnell. “Over the years, we’ve witnessed remarkable accomplishments by Harvard alumni, in many different fields, and we’re delighted that we can help Harvard continue to develop young leaders who will contribute to society as a whole.”

Faust, the Lincoln Professor of History, praised the O’Donnells for their unwavering commitment and loyalty to Harvard. “As we celebrate Harvard’s 375th anniversary, we are profoundly grateful for extraordinarily generous friends like Joe and Kathy O’Donnell. A gift of this magnitude, at this important time in our history, is indicative of the leadership that has defined Joe’s relationship with Harvard since he arrived in Cambridge nearly half a century ago. Joe and Kathy’s support, on so many levels — advisory, volunteer, and philanthropic — means a lot to Harvard, and it means a lot to me personally. I can’t thank them enough.”

The O’Donnells noted that the University has helped change the lives of families around the world, including their own. Harvard’s unparalleled financial aid, which has led to a remarkably diverse student body, along with its athletic opportunities and an extraordinary faculty, are among the reasons behind the outstanding undergraduate experiences of their daughters, Kate ’09 and Casey ’11.

“Even though decades separate our time at Harvard, our daughters and I share a common experience,” Joe O’Donnell said. “We were all undergraduates here, and we all benefited from this incredible mix of talented students and teachers. We were fortunate to have had access to exceptional facilities and resources. From academics to athletics to the arts, it was really about everything the place had to offer.”

The son of an Everett police officer and a homemaker who was valedictorian of her high school class, O’Donnell attended Malden Catholic High School and Phillips Exeter Academy before enrolling in Harvard College in 1963. After receiving a degree in government, he earned his M.B.A. from HBS in 1971. At Harvard, O’Donnell was a six-time letterwinner in football and baseball, and captained the baseball team as a senior.

He founded Boston Culinary Group Inc. (originally Boston Concessions Group Inc.) in 1976, which, under his leadership, grew into a major food service corporation. The company merged with Centerplate in 2010, and O’Donnell now serves as chairman of a nationwide leader in the food service industry. He founded Belmont Capital LLC and also owns Allied Advertising Agency.

In 1986, the O’Donnells founded the Joey Fund in memory of their son, who had died of cystic fibrosis earlier that year at age 12. O’Donnell is also a trustee of the National Cystic Fibrosis Foundation, which twice presented him with the Breath of Life Award, its highest honor. (Note: The Food and Drug Administration recently approved the first drug to treat the cause, rather than the symptoms, of cystic fibrosis.  Visit http://articles.boston.com/2012-02-09/metro/31038332_1_cystic-fibrosis-foundation-robert-beall-lungs-and-airways for more information.)

His other board affiliations include: trustee of Children’s Hospital Trust (philanthropic resource for Children’s Hospital Boston), Malden Catholic High School, the Perkins School for the Blind, and the Winsor School in Boston; and overseer of the Boys and Girls Clubs of Boston and the Boston Symphony Orchestra. In 2001, he was appointed by President George W. Bush to the President’s Advisory Committee on the Arts.