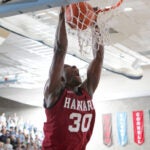 Oliver McNally made four free throws in the final seconds and scored 14 of his 17 points in the second half, while Brandyn Curry drained four 3-pointers, finishing with 12 points, as the Harvard men’s basketball team clinched at least a share of its second straight Ivy League title with a 67-63 win at Cornell Saturday evening.

Harvard, which concludes its regular season at 26-4 and 12-2 in the Ancient Eight, will await Tuesday evening’s matchup between Penn (11-2 Ivy) and Princeton in Princeton, N.J. A Princeton win could clinch the outright Ivy League title for Harvard, as well as the NCAA tournament’s automatic berth, while a Penn victory would force a one-game playoff between the Quakers and Crimson at a date and location to be determined.

Chris Wroblewski shook off a 6-for-16 shooting night to lead Cornell (12-16, 7-7 Ivy) with 19 points, to go with seven assists. Harvard’s hot-shooting second half was matched in every way by the home-standing Big Red, which connected on 6-of-11 from deep to keep the game close. But it wasn’t enough to stop the Crimson.