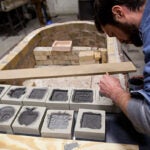 Exhibit focuses on themes of self-perception and bodies

Through her art and articulate explanations of her own struggle with an eating disorder, artist Judith Shaw explained the internal experience of victims of anorexia. “My work takes a mental illness,” she said, “and turns it into something concrete. An eating disorder has little to do with what you eat or how much you weigh. It speaks to feeling not good enough and to self-hatred. For most people, it’s an internal thing.”

Members of the Harvard community gathered at the Student Organization Center at Hilles (SOCH) on March 1 to view pieces by Shaw and student artists that focus on themes of self-perception and bodies. During the opening reception of “Body of Work,” Shaw spoke with visitors and gave a talk on her work.

Kristen Cronon ’12, the student curator at SOCH, said the collaboration with Shaw coincided with an existing initiative to create a student exhibit about bodies with the Harvard peer-counseling group Eating Concerns Hotline and Outreach (ECHO), which exhibit curator Zuri Sullivan co-coordinates.

“Many attribute today’s obsession with thinness to the media and cultural toxicity,” Shaw noted in text provided with her work, “Battle of the Brush.” “The essence of an eating disorder is more complex. For me, it was a belief that I was unacceptable. Restriction and self-denial were second nature. To exercise restraint was empowering. It was easier to get my head around doing without, even if I felt desperately deprived and wanting.”

Through “Battle of the Brush,” Shaw explores the motives of anorexia and her feeling that most victims of eating disorders fight their own insecurities and fears — not messages in the media. Her insights on the subject accompany found objects that she has transformed into artwork depicting her experience of living with and recovering from anorexia. Shaw hopes her art will inform not only the general public but also health professionals on the experience of having an eating disorder.

Years ago, at an exhibition in St. Louis, a viewer suggested Shaw bring her work to medical students. Shaw found the students were desperate for information on eating disorders. “It’s not something you can learn about from a textbook,” she said, “and people who have disorders don’t talk about them.”

Her own experience showed Shaw why teaching physicians to recognize anorexia was important. While most people are diagnosed with eating disorders in adolescence or their early 20s, Shaw’s feelings of worthlessness and insecurity began to manifest themselves physically after she left her job at a New York public relations firm to be a stay-at-home mother to her two sons. For 15 years, she exercised to exhaustion and developed strict eating habits such as eating only “safe” foods. Her doctors joined her friends and family in praising her for her commitment to fitness. Shaw explains, “People thought it was cool that I was getting thinner, smaller. I thrived on the attention.” A doctor once told her that she looked like she needed to “eat a cheeseburger,” but most attributed her symptoms to aging and failed to recognize her disorder.

While Shaw’s work provides a narrower insight into eating disorders, the student works in the exhibition focus more broadly on the body. Submissions ranged from photographs of men wrestling to a pencil drawing of a skeleton that was part machine to a self-portrait of one student’s lips.

Following the reception, Shaw and student artist Sara Lytle ’13 spoke about their experiences with eating disorders and how art aided their recovery process. “Photography is a way of being totally connected with the world, totally aware, totally present, and separated by only a lens,” said Lytle.

The exhibit, which is co-sponsored by Eating Concerns Hotline and Outreach, the Office of Sexual Assault Prevention and Response, the Peer Contraceptive Councilors, and Sexual Health Education and Advocacy Throughout Harvard College, is open to Harvard ID holders through March 10. SOCH is located at 59 Shepard St., Cambridge. The general public is welcome to arrange a visit to the exhibit by contacting Cronon at kcronon@fas.harvard.edu.