A measure of redemption 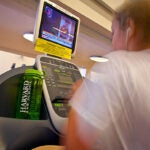 The men’s hockey season finally ended March 17, with a loss to No. 6 Union in the ECAC Championship in Atlantic City, N.J. The team scrapped hard to prolong the season: 14 games went to overtime, and an NCAA-record 11 ended in ties.

“The ties and overtimes were cause for a lot of stress from the coaching staff all the way down through the players,” said Ted Donato, the Robert D. Ziff  ’88 Head Coach for Harvard Men’s Ice Hockey. “But it also bonded us in a way that very few teams have the opportunity to do. The team was galvanized by the stressful situations through the year, and came to welcome them.”

The past several years have tried the Crimson’s patience. After three losing seasons, the Crimson were the media’s pick to finish last in the conference in 2012. The team responded by going 13-10-11, one win shy of the national tournament.

Patience served the Crimson well in this season of redemption, but if there was ever a time to panic, it was in the second game of the ECAC quarterfinals against Yale. One day after an overtime loss, the Crimson entered the first intermission down 2-0 and facing elimination.

“With the amount of comebacks we had, I don’t think anyone was pushing the panic button,” said Donato.

True to form, they saved their best for when it mattered. Harvard scored three power-play goals and won in double overtime. Then, an 8-2 Crimson win ended the series, before Harvard beat No. 13 Cornell, 6-1, in the semifinal. The season-ending surge of 9-4-5 prompted a No. 19 national ranking.

Freshman Steve Michalek joined McNally on the all-rookie team, and sophomore Raphael Girard, who had the fourth-best save percentage in the country, was named ECAC Goaltender of the Month for February. Their play made the Crimson’s least-experienced position perhaps its strongest.

Donato is grateful for the outgoing senior leadership, but he can’t help looking forward.

“There are seasons where, as a coach, you feel spent at the end. You need to take a breath and regroup,” said Donato. “Then there are seasons like this. And you can’t wait to get playing again.”