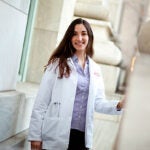 A new kind of after-dinner speaker

On any given night during February or March in the Lowell House dining hall, the din of conversation and clamor of clearing dishes subsides to a muffled murmur at 7:20 p.m. as a faculty adviser approaches the podium to introduce the evening’s speaker. The Lowell House Speeches, initiated last year by resident tutor Sandy Alexander, are an opportunity for students to practice public discourse, while at the same time giving housemates a more personal glimpse into the lives of people they may recognize only in passing.

The remarks are short — just five minutes — to encourage conciseness, and to maximize attendance by listeners. Speakers are encouraged to talk from the heart, whether that means a strongly felt experience that has shaped who they are, or perhaps an unusual idea to put forth to colleagues.

Gorick Ng ’14 spoke about pushing himself outside of a protective bubble in high school, which resulted in his forging unlikely but lasting friendships beyond his comfort zone. Ng is convinced that everyone has an interesting story like his to share, and he felt propelled by the audience’s energy to speak strongly with purpose.

C.J. Curtis spoke with both sincerity and humor about his passion for baseball. Not baseball as in the Red Sox or Big Papi, but baseball as a metaphor for life, as a way to teach lessons. It’s not about winning, Curtis said, but about playing day after day, about learning from your losses, about picking yourself up after a bad play and handling it better the next time, about persevering in the face of adversity. He spoke earnestly, with obvious passion, but still made jokes at his own expense.

Curtis said working on his speech resulted in lasting memories. He had practiced on random groups in public spaces. On the subway, he met a street musician who could relate to performing solo in front of crowds. He spoke to a small group at an airport, and got instant feedback on his gestures and timing from a debate coach who happened to be listening.

Curtis and Ng embrace the Lowell Speeches as a great new House tradition that benefits the speaker and listener simultaneously, strengthening the bonds among housemates as they get to appreciate each other in ways they never knew before.