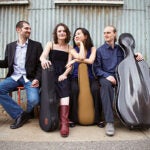 In his new book, historian Niall Ferguson sees a social crisis of confidence

Niall Ferguson is a little concerned these days.

The feeling started years ago, during one of his stints leading a course in Western civilization. “Each time I taught it, I felt I was getting closer to an original answer to the question, ‘Why did the West dominate the rest?’ plus the subordinate question, ‘Is it over?’ ”

Ferguson, the Laurence A. Tisch Professor of History, believes we are witnessing the end of the predominance of the West — “Europe and North America, broadly,” he says — relative to countries like China, India, and Brazil. Much of the rest of the world has not only caught up with Western achievements; according to Ferguson, the West also has lost faith in its own civilization because of the widespread perception that its success was almost exclusively the result of violence and imperialism.

So his latest book, “Civilization: The West and the Rest,” was mostly produced amid a mood of uneasiness, he admits. “I was worried that the West was losing sight of what made it so successful, and perhaps losing those advantages that had previously been so important.”

In “Civilization,” Ferguson dubs these Western advantages his six “killer apps,” which are competition, science, property rights, medicine, consumerism, and the work ethic. “The prescription must be to reinstall and update these apps, to take these six things and make sure we’re doing them as well as we can,” he argues.

“I’ve spent a lot of time lately thinking about how healthy these things are in the West, and the answer is not very. While I was writing the book I also realized that what other fallen civilizations had in common was the speed with which their downfall happened. Things don’t always happen gradually in history; sometimes they fall apart quite fast. So there’s a certain urgency in my argument. If you don’t watch out, things can go wrong very rapidly. By the way, I think that’s what’s happened in Europe. The financial crisis has gone from bad to worse in the span of a year.”

The candid and sometimes controversial Ferguson is especially troubled by the rampant belief that all civilizations are not only equal, but that “the West was actually bad because Western power was based exclusively on conquest and colonization.”

“That self-flagellation, which has been a feature of the academe for a generation, is quite corrosive, because if you teach a generation that the West was essentially wicked and its passing shouldn’t be mourned, then your students aren’t going to feel tremendously committed to its values.”

“The West, in some respects — not all — was a more successful civilization than any other because it was successful economically in making people richer than they ever were before; successful socially in creating greater opportunities, not least for women than any previous society; and successful culturally in opening up whole avenues of scientific and other inquiry that had previously been closed,” he says. “Therefore, we shouldn’t think of the West just in terms of conquest and colonization, slavery and exploitation. That’s only a part of the story. The least original thing that the West did after 1500 was empire.”

Apart from his prolific writing (he’s now at work on a multivolume biography of Henry Kissinger), Ferguson makes ample time for his four children, including a new son, and for playing the double bass.

The former high school punk rocker (“We had several different names, one of which was ‘The Strand’; we were closely modeled on the Jam”) traded in his six-string after discovering jazz. He still plays bass occasionally with the London-based quintet “A Night in Tunisia.”

Ferguson’s sobering message will air on television this spring, when PBS screens the series ‘Civilization: Is the West History?’, which he wrote and presented. “My argument is, ‘Look, let’s identify the strengths, and let’s not pretend that in the period after 1500 something remarkable didn’t happen. There’s a reason why the West got so much richer, longer-lived, healthier, and better educated than anybody else, and it wasn’t just machine guns.’ This idea annoys some people,” he shrugs, “but that’s OK.”