The melding of American music 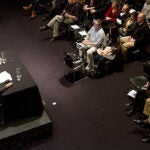 A jewel in the light of Tel Aviv

A crossroad is a possible turning point, perhaps from the past, or from tradition, or from another direction. But to Wynton Marsalis, the legendary musician and artistic director of jazz at Lincoln Center, a crossroad is an intersection meant to be celebrated, which is exactly what he did in his combination performance and lecture at Harvard Monday evening.

“Meet Me at the Crossroad,” the third of six lectures in his two-year presidential lecture series, “Hidden in Plain View: Meanings in American Music,” took the audience in Sanders Theatre on an aural tour of American history. Marsalis was supported in his task by accomplished performers: Doug Wamble on guitar and vocals, Herlin Riley on drums, Houston Person on tenor sax, Lucky Peterson on organ and piano, Reginald Veal on bass, and female vocalist Brianna Thomas.

In a wide-ranging lecture that spanned more than 150 years of American history — and in a loose, at times improvisational, but always seamless performance with his band — Marsalis explored “the mulatto identity of our national music.” In Americans’ willingness to mix genres while simultaneously cultivating distinct regional sounds, he said, they have used music both as a force for racial integration and as a celebration of diversity for centuries.

“We readily accept new styles as a way to enrich our style, our form, and our technique,” Marsalis said. “While other [countries’] traditions may seek purity and perfection of form, we seek cross-pollination as an important step in achieving a more inclusive and complex musical language.”

Music has always been a part of American culture. In 19th-century America, ragtime was a national craze, music was taught in schools, and households had 5 million pianos. After the Industrial Revolution, Marsalis said, a musical culture emerged that incorporated a variety of “root genres,” from jazz and Latin to country western and bluegrass to folk and gospel music.

In the 20th century, those genres were brought together under the dominant aesthetic of the blues, Marsalis said.

“The blues came right up from the bowels of the American soul,” he said. “The blues didn’t given a damn what anybody in Europe thought, or anybody else for that matter.”

The blues united all American root styles, he said, and brought together diverse musicians, black and white, under one musical language. “This embracing of the blues issued a deep indictment of racial injustice,” he said. It exposed “the irony of living in a deeply segregated nation in which performers from all regions and classes chose to express [themselves] through an Afro-rooted music.”

Marsalis and his band explored some of those unlikely marriages of genres and regional sounds, playing hits by such greats as Thomas Dorsey (a writer of “dirty” songs who found the Lord and became a gospel legend), Bessie Smith (“a mastress of metaphor … innuendo, and just the lowdown truth”), Louis Armstrong, Billie Holiday, and Rosetta Tharpe.

The early 20th century was a golden era of experimentation, Marsalis said, when musicians of all races were surprisingly free to play together and to borrow songs and techniques. Musical genres “were only labeled so that the record companies could sell them,” he said.

After World War II, however, things changed. America became a country of highly educated, wealthier citizens who, thanks to the rise of the suburbs, were more segregated than ever. American music, long a bastion of racial integration and a celebration of regional diversity, lost out to the increasingly popular medium of television, which presented a “white bread” portrait of American life that came to dominate the popular imagination.

Meanwhile, Marsalis recounted, another battle was being waged between big bands and vocalists. In 1942, bands went on strike against the major labels and refused to put out new records; vocalists began releasing their own music. Meanwhile, a 20 percent-wartime tax on ballrooms kept people out of the dance halls where bands ruled.

“Eventually, singers eclipsed band leaders as pop stars,” Marsalis said. “By 1946, the bands were doomed, and by 1950 they were gone.

The end of the war also saw the rise in clout of the American teenager, a demographic to be reckoned with and marketed to. With their disposable income, teenagers helped give rise to genres like shuffle and R&B and rewarded entertainment above artistry. Even today, Marsalis said, America recognizes “absolutely no public distinction between entertainers and musicians.”

Still, the era produced some catchy rock ’n’ roll, as Marsalis’ band proved with a rendition of “Johnny B. Goode” that brought down the house.

Turmoil in the 1960s finally severed Americans from their musical tradition, Marsalis said. After the Soviets launched Sputnik, American schools pushed math and science over music and arts. Young people, caught up in political rebellion, developed their own musical traditions of rock and folk to break from what they saw as a corrupt past.

“Our music, genetically engineered to bring us together, became the principal tool for keeping us apart,” Marsalis said. After the Vietnam War ended, he added, “What remained were generations whose social, political, and musical agendas barely survive beyond satire, beyond commerce, beyond apathy.”

Modern Americans can’t appreciate a musical past that they don’t know existed, Marsalis told the crowd. Indeed, a large part of his mission is to bring the importance of that shared past to life by sparking conversation not just among musicians but with leaders in education, business, and other fields.

The next day, Marsalis was scheduled to appear in a panel discussion on “Educating for Moral Agency and Engaged Citizenship” at the Harvard Graduate School of Education, co-hosted by the W.E.B. Du Bois Institute for African and African American Research, as well as a discussion of the artist’s role as entrepreneur at the Harvard Innovation Lab.

There are instructive lessons for America’s cultural future that can only be found in “knowing and embracing the root styles, and in mastering the regional and national particulars of our identity as sung by our greatest poets,” Marsalis said.

Marsalis’ lectures inspire deep thinking about how to both celebrate and overcome our differences, said Henry Louis Gates Jr., director of the Du Bois Institute and Alphonse Fletcher University Professor.

In his work as an educator and a musician, Gates said, Marsalis “shows us how to combine the long list of American differences … and then composes them into the uniquely American symphony that we all are.”