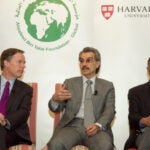 As leaders in government and business search for ways to strengthen the U.S. recovery, new research from faculty at Harvard and Columbia indicates that elementary school teachers have an impact on how much their students earn as adults and, by extension, on the nation’s economy.

“If an elementary school student has an excellent teacher even for a single year, it boosts their income by an average of about 2 percent per year,” says Raj Chetty, professor of economics at Harvard’s Faculty of Arts and Sciences and a co-author of the study with Harvard Kennedy School’s John Friedman and Columbia Business School’s Jonah Rockoff. “To put that in perspective, if we can find a way to raise gross domestic product (GDP) by 2 percent, you’re talking about nearly ending the Great Recession every year. By economic standards, it’s a huge deal.”

Chetty, Friedman, and Rockoff’s research isolated the long-term impact of high value-added (HVA) teachers — those that do the best job of raising students’ scores on standardized tests. The trio looked at data from grades three to eight for 2.5 million children in one of the country’s largest school districts over a 20-year period (1989-2009). They then used other public records to track students after high school. Friedman says the data shows that HVA teachers have an impact on students that is positive, significant, and wide-ranging.

“We found that students who had an HVA teacher — in the top 5 percent — for even a single year, not only earned more as an adult, but also were more likely to go to college or to go to a higher-ranked college, and to live in a better neighborhood,” he says. “They were also less likely to become a teen parent. Across a broad spectrum of measures, they were doing considerably better as the result of having a HVA teacher in elementary school.”

To understand the study’s method, suppose that you could randomly assign some students to a teacher previously rated HVA, and other students to a teacher rated low value-added (LVA). Assuming the students were identical on average, you could compare the test scores of each group and draw some conclusions. If the kids in the class with an HVA teacher do better, you know there’s a cause-and-effect relationship. Chetty, Friedman, and Rockoff couldn’t perform this experiment with actual students, so they used a massive data set of nearly 20 million observations to find situations that were virtually identical.

Having a better teacher has roughly the same percentage impact on a student’s future earnings regardless of the quality of the student or income of her parents. — Raj Chetty

Friedman says that the study’s findings are extremely robust, and apply both to rich and poor school districts. In fact, he says that teacher quality may be the key to improving underperforming schools — and living standards — in poor neighborhoods.

While the impact of HVA teachers may be significant, Friedman cautions that scores of factors affect children, not the least of which are relationships with parents and peers. Moreover, while the new research may identify HVA teachers, it’s still not clear what constitutes good teaching. Despite volumes of research, there are no criteria that enable schools to identify good prospects, nor are there a set of best practices to guide teachers in the classroom.

“There’s been a lot of research on what exactly makes a good teacher,” Friedman says. “Frankly, it hasn’t been all that helpful. There’s one predictor of value-added, which is teacher experience. In the first couple of years, teachers’ value-added goes up quite a bit. Beside that, people who have more-advanced degrees, [have] higher SAT scores, graduated from a better college, are certified versus uncertified — none of these things are strong predictors of value-added.”

Caveats aside, Chetty, Friedman, and Rockoff’s research is making waves in the national media and in politics. New York Times columnist Nicholas Kristof made the study the focus of two recent columns. President Barack Obama gave the work a nod during his 2012 State of the Union Address. While Chetty is cautious about implications for policy makers, he’s also hopeful. He says it’s clear that improving the quality of teaching will have substantial returns for the economy and even decrease poverty. The question is how to go about it.

“More HVA teachers will improve student achievement and long-term outcomes,” Chetty says. “One way you could do it is by hiring more HVA teachers and possibly dismissing LVA teachers. Another is to raise the value-added of the teachers you actually have. I don’t feel comfortable saying that one way or the other is a better policy from the evidence we have. We need to do more research to figure out what actually works best in practice.”

Raj Chetty, John N. Friedman, and Jonah E. Rockoff’s working paper, “The Long-Term Impacts of Teachers: Teacher Value-Added and Student Outcomes in Adulthood,” was published in December 2011 as part of the National Bureau of Economic Research Working Paper Series. The research was conducted with support from the National Science Foundation.