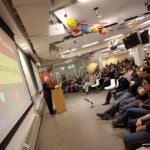 The Harvard men’s basketball team controlled much of the second half, but Ivy League rival Penn scored 15 of the last 20 points to stun the Crimson, 55-54, in front of a sold-out crowd at Lavietes Pavilion on Senior Night Saturday. The Quakers’ Zack Rosen hit two free throws with 23.2 seconds left to give Penn a one-point advantage, which Penn held in the final moments.

The Crimson remain in first place of the Ivy League, a half game ahead of Penn. The Quakers have three games remaining on its schedule, while Harvard has two. The Crimson will visit Columbia March 2 at 7 p.m., before facing Cornell March 3 in Ithaca, N.Y. Penn hosts Brown and Yale next weekend and finishes its Ivy slate March 6 at Princeton.