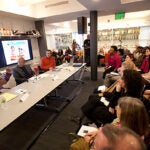 In a land of equality, racism

Jazz legend Wynton Marsalis met his audience at a tuneful crossroads at Sanders Theatre Monday night, exploring America’s diverse musical heritage. On Tuesday, the energetic trumpeter and composer met with members of the Harvard community at the intersections of music, education, ethics, and innovation during two far-reaching panel discussions.

“Entrepreneurs are always in search of ideas, and artists have a knack with creativity and original thinking, which entrepreneurs can learn from,” said Mihir Desai, Mizuho Financial Group Professor of Finance, who moderated an afternoon panel with Marsalis and professors from Harvard Business School (HBS) at the Harvard Innovation Lab, or i-lab, a new University initiative aimed at fostering innovation and collaboration. The conversation was the first in a series of planned events for the i-lab that will explore the connections of artists as entrepreneurs.

Following his Monday night lecture, the third of six in a two-year presidential series, Marsalis pointed to Duke Ellington, the composer, musician, and big band leader as an example of a true innovator.

Ellington stuck fast to his mission of creating a fusion of sound based on musical tradition. He surrounded himself with other expert musicians who could help him realize his musical vision, and he worked harder than anyone, making up for a lack of resources by constantly sacrificing for his dream, said Marsalis during the HBS panel.

“He so believed in his music that he would sacrifice whatever he had to sacrifice for that music to be right. And the first thing he sacrificed was time. When everybody else was sleeping, he was up,” perfecting his music, said Marsalis.

Like music, business requires a profound understanding of the subject matter at hand, said the artistic director of Jazz at Lincoln Center, and confident professionals who know their material and are ready to lead. Marsalis said he examines a spreadsheet the same way he reviews a complicated musical score, by studying every number on the page.

“There’s not a conductor in the world who gets the score of [Igor Stravinsky’s] “The Rite of Spring” and goes, ‘Wow, there are a lot of notes here.’ You don’t sit in front of an orchestra with a score and say, ‘Well, I don’t understand these 20 measures, but we’ll make it through that OK.’ ”

In a story that resonated with the innovators and dreamers in the crowd, Marsalis recalled important advice he received from his father as he prepared to leave home as a teen. Friends and family told him to have something to fall back on if his plans for a musical career didn’t work out. Others cautioned that if he stuck with music he would struggle, like his father, a pianist, who worked hard just to make ends meet.

“My daddy said, ‘Man, the only thing I can tell you is, don’t have nothing to fall back on.’ ”

Music and the arts can be a guiding force in helping students to develop solid, moral foundations, several Harvard professors agreed during a talk with Marsalis titled “Education for Moral Agency and Engaged Citizenship” at the Harvard Graduate School of Education.

During the discussion, Marsalis touched on many of the themes in his 2008 book “Moving to Higher Ground: How Jazz Can Change Your Life.” The book discusses how concepts in jazz can be applied to broad life lessons involving integrity, creativity, empathy, and humility.

The trust, collaboration, experience, and communication that unfold on a stage filled with jazz musicians are applicable to the classroom as well, said Marsalis.

“Music forces you to hold two opposite thoughts in your mind, and it forces you to act on both of those things … all the time.” As part of a band, he said, you have to always be aware of what you are playing and what somebody else is playing. That art of listening, he argued, is essential to education.

As a young man, Marsalis played with an ensemble that included many members of Ellington’s band. The experience taught him a lesson in communication and understanding.

Holding students to high standards and expecting them to bring ideas, energy, and commitment to their music is another Marsalis hallmark. He challenges young musicians, he said, as a means of getting them to take their craft seriously and bringing out their best.

His message was an important one for educators to remember, said panelist Diane L. Moore, a senior lecturer in religious studies and education at Harvard Divinity School.

“You take them seriously. You expect that they can rise to a standard,” said Moore. “Too often, we don’t involve and invite our students in any context of any classroom to collaborate, to assume they come into the classroom with valuable information that they can share.”