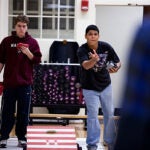 The magic of beanbags

Anthropologist documents the stories behind population and health policies

When Susan Greenhalgh says she studies “biopolitics,” one might imagine a form of futuristic, dystopian science.

But Greenhalgh’s interests are hardly that. As the newest professor of anthropology in the Faculty of Arts and Sciences, she explores the ways in which policies are shaping how we use and view our bodies here and now. Her work marries large-scale scientific initiatives, from China’s controversial one-child policy to America’s new war on obesity, with the small-scale stories of human lives.

Greenhalgh, a native of central Maine, never even took an anthropology course in her years at Wellesley College. But during her senior year, she decided to spend a year off traveling before graduate school.

“I didn’t want to be a little rat running around on a treadmill in a cage, without having seen the world,” she said. Mainland China was still closed off to outsiders, so Greenhalgh spent several months in Nepal, where she absorbed the stories of Tibetans who had recently fled China over the Himalayas. That experience — combined with the influence of Margaret Mead’s autobiography “Blackberry Winter” — sold her on anthropology and China studies.

The late 1970s was a pivotal time to be a China observer in the West. As Greenhalgh studied for her doctorate in anthropology at Columbia University, China was undergoing an economic and political opening up. After finishing her Ph.D. in 1982, Greenhalgh took a job at the New York–based Population Council as “an anthropologist, policy analyst, and resident China hand,” a fortuitous position that allowed her to travel often and eventually carve out a niche as an authority on the new one-child policy.

“There were so many exposés in the American media of the horrific implementation of the one-child policy,” she said. “But almost nobody who was talking about it in the media had any intimate knowledge of China.”

She seized the opportunity to counter the dominant Western narrative that Chinese citizens were uniformly coerced into complying with the one-child rule. While atrocities did and still do occur — a round of forced sterilization in the 1980s, abandonment of baby girls, the continued abortion of female fetuses — China’s grappling with its one-child policy has been more nuanced than most Americans realize.

“The Chinese state is nothing if not clever and strategic, and brilliant in terms of displaying various forms of statecraft,” she said.

Surprisingly, the one-child rule was borne of a selective faith in Western science, as Greenhalgh documented in her best-known book, “Just One Child: Science and Policy in Deng’s China.” The strict policy was the brainchild of a Chinese military scientist, who discovered a set of Western cybernetics equations and applied them to population control.

“The usual population experts were silenced,” she said. “It was a gigantic political struggle, in which the power of the military triumphed.”

While China originally thought its population growth would hinder economic development, Greenhalgh argues, Communist Party leaders now see their increasingly well-educated, billion-strong workforce as a boon. The one-child policy has slowly morphed from an instrument to bring down birthrates into a more comprehensive social policy that addresses the well-being of women, the migration from the countryside to the cities, and the problem of an imbalanced society with 120 young men for every 100 young women.

“China’s very keen to push the nation into the information economy of the 21st century, and it’s trying to promote what it calls scientific citizens,” she said. “From the beginning, it was about not just limiting quantity, but also raising the quality of the Chinese people.”

But China is hardly alone in trying to shape the physical and moral character of its people, she maintains. Greenhalgh’s latest work looks at what she calls the new American ideal of “the fit, trim, biocitizen,” created by a constant stream of messages from medical scientists, government leaders, and public health officials.

“This public discourse about the obesity epidemic has intensified people’s concerns about their bodies, because weight is now a bona fide ‘disease,’ and weight loss has become a matter of official government policy,” she said. This summer she will publish her first article on the subject, an ethnography of overweight young people in southern California — “the epicenter of the cult of the perfect body” — that looks at their experiences with the constant pressure to lose weight.

“It’s one of the greatest biopolitical injustices of our time,” she said.

Her interest in the “medicalization” of American life stems in part from her own experiences. In the mid-1990s, when Greenhalgh had just moved across the country to teach at the University of California, Irvine, she was misdiagnosed with fibromyalgia, an incurable syndrome characterized by mysterious full-body pain. She underwent a series of therapies, including medication that caused horrible headaches and cognitive dysfunction.

What was worse, she said, was the feeling that her life would be forever altered by the diagnosis. A sports fanatic, she was told to give up in-line skating, kayaking, swimming, hiking, and other activities that she enjoyed so she could lessen the pain. When she finally sought a second opinion — which concluded that her symptoms of fibromyalgia had in fact been produced by the treatments — the veil lifted.

“My life can be divided into two parts: before and after,” she said. The experience became the basis for “Under the Medical Gaze,” in which she turned the tools of ethnography on her own life. She saw the book as a way to reclaim her story from the doctor who tried to rewrite it — an all-too-common side effect of the often lopsided power dynamic between physician and patient.

She now shares that story with her undergraduate students in a course called “The Woman and the Body,” which she has taught alongside her China courses for the past 15 years. Whether her focus is China’s unmarriageable men, overweight American teenagers, or even her own past, Greenhalgh hopes to demonstrate anthropology’s power to bring unheard or marginalized narratives to the fore.