From V-2 rocket to moon landing 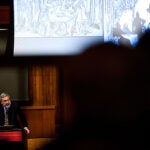 The Last Supper as Passover

He was a handsome, charismatic, brilliant, onetime member of Adolf Hitler’s Nazi Party and SS paramilitary force. He also was a hero in the United States hailed for helping to land the first man on the moon.

During World War II, German rocket scientist Wernher von Braun led a group of engineers in creating the V-2 ballistic missile. The weapon eventually killed 7,000 Allied troops and civilians in London and Antwerp, Belgium, and led to the deaths of 20,000 prisoners in the German forced labor camp where it was manufactured.

But von Braun and his colleagues ultimately found a new home. After surrendering to the Americans near the end of the war, the scientists were moved to the United States, where they quickly became a vital part of the U.S. Army’s own ballistic missile program. In 1960, the new National Aeronautics and Space Administration (NASA) came calling. From NASA’s space flight facility in Huntsville, Ala., von Braun and his team took aim at another target: the lunar surface.

Author Diane McWhorter’s latest book project, “Moon of Alabama: From Nazi Germany to Tranquility Base, via the Segregated American South,” explores how German scientists from Hitler’s Third Reich helped to create the Saturn V booster rocket that shot the Apollo 11 mission into space. But in addition to relaying history, McWhorter, the Mildred Londa Weisman Fellow at the Radcliffe Institute for Advanced Study, hopes to capture the sense of irony associated with the United States hosting “technological masters of nihilism” and believers in a master race in the deep South, which was once America’s own “laboratory of genocide.”

During a recent talk at the Radcliffe Gymnasium, McWhorter said she hopes in part to offer her readers a nuanced version of the age-old conflict of good versus evil with her latest work, potentially reframing the adage instead as a case of good versus normal, or good versus what is considered normal at the time.

Sometimes, she told the crowd, “It’s hard to recognize evil when you are living in it.”

McWhorter would know. She was raised just outside of Birmingham, Ala., and was roughly the same age as the four young African-American girls who were killed in the bombing of the city’s 16th Street Baptist Church in 1963. But despite the violence that raged so close to home, she led a protected, privileged life, largely unaware of the tragedies unfolding nearby on a battleground of the Civil Rights era.

Author of the Pulitzer Prize-winning “Carry Me Home: Birmingham, Alabama: The Climactic Battle of the Civil Rights Revolution,” McWhorter said her own past often draws her “to places where terrible things happen.”

Her latest research casts light on von Braun’s claims that he was an innocent scientist with dreams of space flight who feared the Nazi regime and was disconnected from the horrors that resulted from his ballistic-missile work.

“The basic fact remains that von Braun devised cutting-edge technology intended to help Hitler dominate the globe,” said McWhorter, “and he did so with what he never would deny was total commitment and enthusiasm.”

Another twist further highlights the irony. Von Braun, backed by NASA, became a public face for the desegregation movement. The space agency, said McWhorter, “pushed him to become an ambassador for race relations,” and had him urge local leaders, including George Wallace, then governor of Alabama and a staunch defender of segregation, to “do the right thing.”