As strong as an insect’s shell 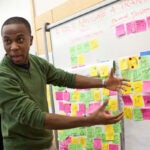 Designing in the human context

Harvard researchers at the Wyss Institute for Biologically Inspired Engineering have come up with a tough, low-cost, biodegradable material inspired by insects’ hard outer shells. The material’s inventors say it has a host of possible applications and someday could provide a more environmentally friendly alternative to plastic.

The material, made from discarded shrimp shells and proteins derived from silk, is called “shrilk.” It is thin, clear, flexible, and strong as aluminum at half the weight, according to postdoctoral fellow Javier Fernandez, who began work on chitin-based material as a doctoral student at the University of Barcelona and developed shrilk during a year-and-a-half stint working at the Wyss Institute with Director Donald Ingber.

Ingber, the Judah Folkman Professor of Vascular Biology at Harvard Medical School and Harvard-affiliated Children’s Hospital and professor of bioengineering at the Harvard School of Engineering and Applied Sciences, said companies have already expressed interest in the material, particularly for medical applications. Possible medical uses are boosted by the fact that the ingredients in shrilk have already been approved by the Food and Drug Administration. Potential uses include sutures that would dissolve over time in hernia repair, protective coverings for burns and wounds, and a scaffold on which cells can grow to regenerate tissue.

A major benefit of the material, which was described in a December issue of the journal Advanced Materials, is its biodegradability, Ingber and Fernandez said. Plastic’s toughness and moldability represented a revolution in materials science during the 1950s and ’60s. Decades later, however, plastic’s very durability is raising questions about how appropriate it is for one-time applications such as plastic bags, or short life-span consumer goods, used in the home for a few years and then tossed into a landfill where they will decompose for centuries.

“All this plastic, what’s the point of making something that lasts 1,000 years?” Fernandez asked.

Shrilk not only will degrade in a landfill, but its basic components are used as fertilizer, and so will enrich the soil.

Natural materials, Fernandez said, were supplanted by synthetic materials partly because synthetics can be easily controlled in manufacturing and made into a wide variety of goods. Natural materials are making a comeback, however, as scientists learn from nature the manufacturing techniques needed to mimic the properties that make them desirable. Shrilk is a good example of the Wyss Institute’s mission, which is to learn how to make things from nature’s own engineering.

“This is the second chance for natural materials,” Fernandez said.

Shrilk’s secret, Fernandez and Ingber said, is not just its chemistry but also its design. There are two basic ingredients, a variation on the material chitin that makes up a large part of an insect’s tough outer layer, called chitosan, and fibroin, a protein derived from silk. But just combining those two ingredients doesn’t produce a hard, flexible material. Instead of blindly combining the materials, Fernandez and Ingber looked to nature to see not just what materials were used, but how.

In an insect’s body, the fibroin protein and chitin are layered, creating the kind of stiff design that gives plywood its strength and rigidity. By mimicking nature’s design and layering the chitosan and fibroin protein, shrilk was born.

“Much of the structural properties found in nature are not just chemistry, they’re architecture,” Ingber said.

Shrilk has great potential, the two said. Chitin is one of the most abundant materials in nature, found in everything from shrimp shells to insect bodies, snail and clam shells. That makes shrilk not only low cost, but also potentially scalable should it be used in applications demanding a lot of material.

Work on shrilk is continuing in the lab, the two said. Ingber said the material becomes flexible when wet, so they’re exploring ways to use it in moist environments. They’re also developing simpler manufacturing processes, which could be used for products in non-medical applications, like for computer cases and other products inside the home. They’re even exploring combining it with other materials, like carbon fibers, to give it new properties.