No time to waste 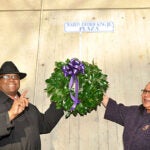 Harvard recycles, reuses, or composts more than half its waste, but there is room to further reduce the more than 6,300 tons the University sends to landfills each year, according to a recent audit.

Rob Gogan, associate manager of recycling services in Harvard’s University Operations Services, presented a snapshot of the University’s progress on Thursday at the Geological Lecture Hall. The lecture was the latest in the “Trash Talk” series sponsored by the Peabody Museum of Archaeology and Ethnology.

Harvard has made significant strides in reducing its waste in the past decade. In 2002, the record recycling rate for any month that year was just 34 percent. The University topped 50 percent in a month for the first time in October 2007. Today, Harvard’s recycling and reuse rate stands at about 55 percent annually. A recent audit, however, shows that there’s considerable room for improvement, which will be necessary if the University is to achieve its goal of zero waste by 2020.

The biggest trend in recycling has been the increase of composting, in which food, landscaping, and other organic waste is gathered, broken down, and trucked to nearby farms to be used as fertilizer, Gogan said. Harvard’s switch in recent years to single-stream recycling has aided the move to composting, Gogan said, by allowing recyclables to be gathered in one barrel instead of two, freeing up room for a composting barrel.

Local and global nonprofits have benefited from the reuse movement, Gogan said. One nonprofit sends usable materials — including a surprising number of crutches once used by students — to Haiti, unneeded dormitory beds have gone to an orphanage in El Salvador, and computers that would otherwise be recycled are instead donated to an Allston organization that refurbishes them and sells them at low cost to nonprofits.

“We don’t want to waste anything,” Gogan said.