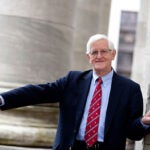 Albrecht Dürer is arguably the greatest German artist of the Northern Renaissance, famed for his masterful woodcuts, engravings, watercolors, and oils. His celebrated “Adam and Eve” (1507) is considered a signature masterpiece of a time when artists commonly depicted only religious, mythological, biblical, and allegorical themes.

But Dürer was more than an artist, said Harvard art historian Susan Dackerman in a Harvard Art Museums “In-Sight Evenings” lecture on Wednesday. In fact, he greatly influenced 16th-century science with his cartographic and anatomical work. It was so innovative, she said, that it shows Dürer as a science collaborator — an equal partner in creating knowledge, not a servant charged with depicting it.

Consider the examples Dackerman offered her audience in the Arthur M. Sackler Museum lecture hall: Dürer’s iconic woodcut of a rhinoceros, so enduring that it was the animal’s staple scientific image until the 18th century; a groundbreaking terrestrial map, “the first perspectival rendering of a terrestrial hemisphere,” she said; a vivid woodcut depicting the causes and effects of the disease syphilis; a map of brain function; and in 1515 the first printed maps of the northern and southern celestial hemispheres shown as polar projections.

His influence on the astronomy of the day was profound,” Dackerman said, “and helped visualize changing conceptions of the universe.”

In a radical departure, Dürer used the same maps to move humankind to the center of the depicted science. Copying a 1503 celestial drawing by astronomer and collaborator Conrad Heinfogel, Dürer replaced allegorical figures like Venus and Mars with portraits of four ancient astronomers, including Aratos and Ptolemy (who is busy measuring with dividers). “Choosing to depict historical scholars engaged in empirical investigation was a momentous conceptual shift,” said Dackerman. “Dürer’s astronomers represent a changing worldview, one in which the universe is comprehended through human intervention rather than through spiritual or symbolic means.”

Study a print like this closely enough, and you can sense the shifting values of a vanished age. Dürer’s substitution, in fact, seems equivalent to Stephen Greenblatt’s metaphorical moment in which the world became modern: the 1417 rediscovery of Lucretius’ first century BCE poem “On the Nature of Things.” (Greenblatt is Harvard’s Cogan University Professor of the Humanities, and author of the new book “The Swerve: How the World Became Modern,” which recently won the National Book Award.)

Dackerman’s lecture, “Taking Dürer Out of the Box,” was informed by her work on the recent Sackler exhibition “Prints and the Pursuit of Knowledge in Early Modern Europe,” which showcased atypical works of Renaissance masters, and how they influenced scientific inquiry.

Part of the story of that age is one of collaboration, the rich admixture of art and science practitioners. The 1515 maps, she said, required three experts to produce: The stars’ coordinates from Johannes Stabius, imperial astronomer and adviser to the Holy Roman Emperor Maximilian I; the stars’ positions from Heinfogel; and Dürer’s imaginibus circumscripsit, his circumscribing the images of the stars. (The final maps included a coat of arms for each of the three, equal, and in a row.)

“Dürer is not positioned as a mere illustrator in the service of the two theoreticians,” said Dackerman, “but as an equal collaborator who brings particular knowledge and skills to the project.” The artist later bought a Nuremberg house with an observatory on the top floor, complete with astronomical books and instruments, suggesting, said Dackerman, that “he was more than a hired hand in the service of an astronomer.”

Still, Dürer remained the consummate artist. His robust woodcut maps, in contrast to Heinfogel’s faint drawings, depict astrological creatures like the lion (Leo) and the lobster (Cancer) as vivid, flexible, and lively — evoking, said Dackerman, “the motion of the constellations.”

Meanwhile, Dürer ’s celestial maps gained momentum as a scientific standard. They were used as templates for cosmographer Johann Schoner’s 1515 printed globe, whose “gores” — elongated sections — were inspired by the master’s woodcuts.

Even before the celestial maps, Dürer had experience with astronomical subjects. He was 25 when the syphilis broadsheet appeared in 1496, including a swirl of planets above the victim’s head. (Dürer’s collaborator, Nuremberg physician Dirk van Ulsen, believed syphilis was caused by a misalignment of the planets.) The science was off, but not the young Dürer’s art, right down to the figure’s lumpy lesions and red, swollen face. It is proof again of an artistic partnership with science, said Dackerman, though this time in the realm of medicine.

His terrestrial map required a knowledge of geometry, she said, and calculations that enabled Dürer to depict a two-dimensional surface as if it were a globe.

The artist’s rhinoceros woodcut, circa 1516, was rendered from a sketch and a description of the animal that made its way to Nuremberg; Dürer never saw the animal itself. But his depiction — including fanciful armor plating, scalloped edges, and an inaccurately placed dorsal horn — showed another dimension of the artist’s relationship with science, namely “the tension between the growing importance of empirical observation,” said Dackerman, “and Dürer’s display of his own artistry, in which his skills of making are rendered equal to or better than the results of direct observation.

Regardless of that tension, Dürer was not a solitary art maker in these matters, but a collaborator. He was one craftsman in a workshop peopled by others, not the “genius toiling alone,” she said.

The mythology of the solitary genius is an artifact of “modernist thinking,” said Dackerman, and its retrospective violation by Dürer may explain why his collaborative scientific work merits so little attention from art historians. But that’s an imposed bias, she said, and the great German artist’s minor prints “should continue to be taken out of their boxes.”