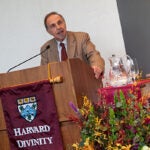 The wisdom of William James

Gasps echoed through the Radcliffe gymnasium on Wednesday as audience members reacted to the image of a woman’s foot, projected on a large screen at the front of the hall.

It was a foot in name only. The misshapen mass looked more like a hoof bisected by a crack. The deformity was the result of foot binding, a common practice in much of China until the middle of the last century that involved wrapping the foot of a young girl or woman tightly with a cloth to stunt its growth, explained Laurel Bossen, the Carl and Lily Pforzheimer Foundation Fellow at the Radcliffe Institute for Advanced Study.

That particular type of bound foot was called “the three-inch golden lotus,” said Bossen. “That’s the ideal. It gradually broke the girl’s arch … you can see that the arch is just a crevasse on that foot.”

While at Harvard, Bossen and Melissa Brown, Radcliffe’s Frieda L. Miller Fellow, in collaboration with anthropologist Hill Gates, are writing a book on female labor and foot binding in early 20th century China. Their research is based in part on large-scale surveys in the 1990s done by Gates, and on their own interviews from the past few years with thousands of elderly women from 11 provinces in rural China.

The scholars reject the prevailing theories that bound feet in China were considered more beautiful, a means of male control over women, a sign of class status, and a chance for women to marry well. They also reject the widespread notion that such women couldn’t work, and thus contributed little to their families and the larger economy, and the belief that campaigns against the practice were what ultimately put an end to it.

Instead, their research suggests that the practice was directly linked to the use of young girls and women in the hand-labor force, and that its disappearance coincided with the arrival in China of the Industrial Revolution.

When they asked women during interviews why they thought their feet were bound, many responded that they were expected to “marry up economically,” said Brown, a researcher at the Minnesota Population Center at the University of Minnesota who is interested in historical processes of transformative social and cultural change.

But she questioned the notion that bound feet were considered more alluring to men and that they could lead to a better marriage, because men weren’t picking their own brides. Their mothers were.

“Why in the world would a mother want to pick a sexy daughter-in-law?”

While the women surveyed thought foot binding would lead to a good marriage, the numbers didn’t add up. After a detailed analysis, the researchers found no overall statistically significant data to support the theory that women with bound feet were in more prosperous households after marriage as compared with their birth households.

“What we found, in fact, is that there is not a link,” said Brown, adding, “The majority show no marital mobility.”

So why were the feet of 7-year-old girls bound so often if the end result had no impact on their ability to marry above their class?

The answer involves a financial reality.

“For me, the question about foot binding has always been ‘How could rural families afford to lose women’s labor’ ”? said Bossen, anthropology professor emerita at McGill University. “What work could they do when they had bound feet?”

Bossen said the research points to a clear connection between foot binding and hand labor. Mothers needed their daughters’ help to produce both cloth for the family and extra cloth for sale. They needed to keep their “willful, playful” young daughters at their sides, she said, to have them learn how to spin, wind, twist, and weave fibers they could sell when the crops failed or fell short at harvest.

“For girls who are doing handwork for income, the odds are 4.5 to 1 that they will be bound,” said Bossen of the studies they conducted in China’s Yunnan Province.

“Foot binding can be seen as a way of tying them down, and training them in the handwork, supervising them, and keeping them close at hand. It’s not the only way, but I would argue it became part of the cultural repertory.”

And as the value of women’s hand labor decreased, so did foot binding.

The eventual arrival of the Industrial Revolution had a dramatic impact on women’s work, as cotton yarn began to be imported and factories eventually replaced the work women did by hand. Citing research that spanned the 1920s to the 1940s, the researchers found that the likelihood that a woman doing commercial handwork would also have bound feet dropped drastically.

The link between commercial handwork and foot binding is “highly statistically significant,” said Bossen. The arrival of cheaper machines made textiles “undercut income from hand labor and caused foot binding rates to plummet.”