The import of civic education 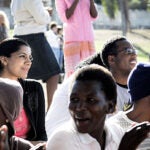 Panel examines how the public can learn to stay informed

In recent years, civic education, an important element for democracy to flourish, has fallen to the public schools, universities, and colleges to provide, said Peter Levine, director of the Center for Learning and Engagement and research director at Tufts University’s Jonathan Tisch College of Citizenship and Public Service.

“There used to be a lot of institutions — labor unions, political parties, churches — that recruited you without asking you to be civically educated,” Levine said. “All these have been shattered.” There is “nothing that has that same function that turns you into a citizen outside of schools.”

Levine was a panelist Monday for a seminar called “The Fate of Civic Education in a Connected World,” a “Fred Friendly” session held in Austin Hall at Harvard Law School. Based on the PBS programs originated by the late broadcaster Friendly, the seminars engage audiences and panelists in public policy conversations. Monday’s event explored the importance of educating people to be good citizens.

So what is civic education?

“It’s aiming at the development of a citizen,” said Elizabeth Lynn, a senior research fellow at Valparaiso University. “It’s the person on the school boards, community boards. It’s every person in civic life.”

People think of civic education as meaning dull time, with students trapped in a classroom. Getting people to act on ideals is a key to making such teaching relevant.

“If we get people out of the classroom and engaged, it’s much more fun, and people discover this much more quickly,” said Ellen Condliffe Lagemann, the Levy Research Professor at Bard College, former dean of the Harvard Graduate School of Education (HGSE), and co-editor of the book “What Is College For?” with Harvard’s Harry Lewis, Gordon McKay Professor of Computer Science.

She said she admires doers such as the founders of MoveOn.org and the Occupy movement.

“Education is not about just how to study and reflect, but on how to take action,” Lagemann said.

Education can engage students through the powerful ideas behind their civic institutions, said Juan Carlos De Martin, a Berkman Faculty Fellow and director of the NEXA Center for Internet & Society at the Politecnico Di Torino, Torino, Italy. Such teaching is important for someone to be a full participant in a democratic society.

“If you know the facts, it allows you to ask deep questions about issues,” De Martin said. “We’ve seen in Italy someone like [recently resigned Prime Minister Silvio] Berlusconi come along and manipulate democracy.”

Attendee Jonathan Zittrain, a professor at Harvard Law School (HLS), a professor of computer science at the Harvard School of Engineering and Applied Sciences (SEAS), and a co-founder of the Berkman Center for Internet & Society, proposed early and robust middle school training of students in civic education by arguing the merits of subjects like creationism, and then coming to a civil resolution where the losers are treated fairly — a goal in a democratic society.

Lewis said that discussion around the Occupy movement’s message of income inequality was an opportunity to help prepare citizens to participate in a democratic society.

“The country needs it,” Lewis said. “As a nation, we’re in despair about taking any pride about the functioning of our government.” Lewis said Harvard has a particular “moral burden to pay attention” because it educates so many future government and corporate titans.