Slow road to stability for emulsions 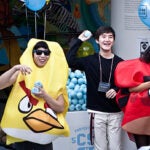 Physical equilibrium may take years for particles in oil-water mixtures

By studying the behavior of tiny particles at an interface between oil and water, researchers at Harvard have discovered that stabilized emulsions may take longer to reach equilibrium than previously thought.

Much longer, in fact.

“We were looking at what we thought would be a very simple phenomenon, and we found something very strange,” said principal investigator Vinothan Manoharan, associate professor of chemical engineering and physics at the Harvard School of Engineering and Applied Sciences (SEAS).

“We knew that the particle would stick to the interface, and other researchers had assumed this event happened instantaneously,” he says. “We actually found that the timescale for this process was months to years.”

The findings, published in Nature Materials on Dec. 4, have important implications for manufacturing processes used in pharmaceuticals, cosmetics, and foods.

An emulsion is a mixture of two or more insoluble liquids — usually oil and water. A simple emulsion such as vinaigrette takes energy to create (for example, shaking), and over time it will separate out, as the oil or water molecules cluster together again.

To give products such as mayonnaise and sunscreen a reasonable shelf life, manufacturers typically add stabilizing particles to create Pickering emulsions (emulsions stabilized by solid particles that absorb onto the interface between the two phases). Ice cream, for example, is stabilized by tiny ice crystals that cling to the interfaces between the fat and water droplets, creating a rigid physical barrier. In traditional mayonnaise, proteins from the egg yolk perform the same role.

When the oil and water in these types of emulsions are completely mixed and stable, the particles are said to be at equilibrium.

“There are certain rules for making different types of emulsions,” said Manoharan. “For example, do you get oil droplets in water, or water droplets in oil? The conventional rules are based on the properties of the materials, but our results suggest that it also has to do with time and the energy you put into the system.”

To study Pickering emulsions, Manoharan and his colleagues used holography to gain a three-dimensional view of microscopic polystyrene balls as they approached an interface between oil and water. The researchers used light from a focused laser (optical tweezers) to gently push a particle toward the interface, hoping to watch it settle into its predicted equilibrium point, straddling the oil-water boundary.

To their surprise, none of the particles reached equilibrium during the experimental timeframe. Instead, they breached the interface quickly, but then slowed down more and more as they crossed into the oil. Mathematically extrapolating the logarithmic behavior they observed, Manoharan and his colleagues discovered that the particles would stabilize on a time frame much longer than anyone had predicted.

“Our experiments only went on for a few minutes, but for the system to reach equilibrium would take at least weeks to months, and possibly years,” said lead author David Kaz, Ph.D. ’11, who earned his degree in physics at Harvard’s Graduate School of Arts and Sciences.

The finding is unlikely to affect time-tested recipes, but many other applications rely on very precise predictions of the particles’ behavior.

In biomedical engineering, for example, Pickering emulsions are used to create colloidosomes— microscale capsules that could deliver precise concentrations of drugs to specific targets in the human body. Understanding the behavior of particles at liquid interfaces is also relevant to many aspects of chemical engineering, water purification, mineral recovery techniques, and the manufacture of nanostructured materials.

The new research suggests that the models used to predict and optimize these systems may be too simplistic.

“It has always been assumed that the particles moved almost instantly to their equilibrium contact angle or height, and then Young’s law would apply,” said co-author Michael Brenner, Glover Professor of Applied Mathematics and Applied Physics at SEAS. “What we found, though, is that equilibrium might take much, much longer to achieve than the time scale at which you’re using your product.”

“If you’re really stirring hard, maybe you can get the particles to reach equilibrium faster,” Brenner added. “But what we’re saying is that the process matters.”

Ryan McGorty (Ph.D. ’11, physics) and Madhav Mani (Ph.D. ’10, applied mathematics) also contributed to the research, which was funded by the National Science Foundation (NSF) and the NSF-supported Materials Research Science and Engineering Center at Harvard.