Prayers for the season 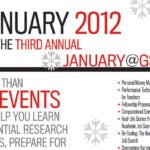 In January, a learning smorgasbord

At Appleton Chapel, a message of hope and concern

Sunlight streamed through the large Palladian window in Appleton Chapel, casting soft rays on the rich, red poinsettias decorating the intimate space for the final Morning Prayers of the year.

As the fall academic session wound toward a close, so too did the time-honored Harvard tradition of music, prayer, and a brief address in Harvard’s Memorial Church, until next semester. The festive plants in the serene space celebrated the holiday season, one that can elicit conflicts as well as joy, said the Rev. Wendel W. “Tad” Meyer, who became associate minister for administration last December, and is acting Pusey Minister in the Memorial Church.

There is the “stark wilderness of Advent,” said Meyer, which is contrasted with “the rich and heady domain of the holiday season.”

Many homes, with their bright decorations, colorful traditions, festive foods, and gathered families and friends, reflect the beauty, rhythms, and rituals of the holiday season. Yet, Meyer said that as he was decorating his Cambridge apartment with a small Nativity scene, he was “struck by a deep and disturbing irony.”

“The Christian icon we use to celebrate and decorate our homes is an image of homelessness,” said Meyer, recalling the story of the young family of Mary, Joseph, and Jesus, who are forced to seek refuge in a stable. The Christmas season, while it contains much cheer and goodwill, also can hold uncomfortable tensions. The bright lights and warm hearths can’t camouflage the hatred and prejudice afoot in the world or the darker memories of holidays past, those tainted with loss and frustration, with unkept promises and broken hearts.

“The homes we celebrate are not perfect havens of warmth and security but are part of the wilderness of human experience, vulnerable to all the joys and sorrows of human existence,” he said.

Yet comfort can be found, Meyer added. By accepting that we are “undeserving objects of God’s relentless love … perhaps we can learn to cherish both our homes and our homelessness, knowing that they are both ways in which we are being drawn into the wilderness of the love of almighty God.”

In delivering his remarks, Meyer kept the traditional ritual of Morning Prayers, which dates back to Harvard’s founding in 1636. During the academic year, members of the Harvard and Cambridge communities gather daily for a brief service.

Music is provided by the Choral Fellows of the Harvard University Choir. On Tuesday, members of the choir sang an ethereal, unaccompanied version of the Plainsong “Angelus ad Virginem.”

The chapel’s Palladian window, once blocked by the Fisk Opus 46 organ’s pipes, now contains a large green wreath. The old organ was dismantled and shipped to a church in Texas last year, to be replaced by a 1929 Skinner Organ Co. instrument as part of a donor-funded $6 million renovation. In the spring, the church will celebrate the debut of the Fisk Opus 139 organ that is being carefully tuned in the church’s second-floor rear gallery.