Powerhouses in the making 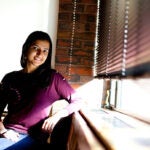 Inspired by their stories

It’s reading period at Harvard, but squash practice is still in session.

On the Murr Center squash courts, puddles of sweat line the floors. Assistant coach Reg Schonborn orders his crew to run drills. “We can stand to get a little stronger, a little fitter,” said Schonborn, a native of South Africa by way of Trinity College in Hartford, Conn., where he played as a student and then coached before joining Harvard in the spring of 2010.

The men’s and women’s teams are as yet undefeated, winning their last nine and seven matches, respectively. “We’re competing pretty well, but we haven’t been pushed too far yet,” said Schonborn.

He’s eyeing a game against his alma mater. Trinity, which holds the record for the longest winning streak in any intercollegiate sport in the nation, will be a tough matchup come January.

“As far as team weaknesses go, I can’t think of any,” said Mike Way, the inaugural Gregory Lee ’87 and Russell Ball ’88 Endowed Coach for Squash. “I really feel like we’re going from strength to strength. We have a well-deserved confidence, a quiet confidence.”

In Way’s first year at Harvard, the women’s team finished second in the league and the men finished fifth. The British-born coach is widely recognized as one of the best squash coaches around, and once coached Jonathan Power, the 1998 world champion in the sport.

“A lot of last year was finding my feet,” said Way. “Now I know the lay of the land. I have two assistant coaches now, and we’re a very good fit, with our coaching abilities.”

“He’s doing a great job with us, and we’re really lucky to have him, and all our coaches,” said Nirasha Guruge, a senior economics concentrator from Sri Lanka, and the women’s co-captain.

“Coach Way is an extremely focused, tactical coach,” reiterated men’s co-captain Will Ahmed, a senior government concentrator from Mill Neck, N.Y. “He pays a lot of attention to form and movement, and he’s recruited good coaches alongside him.”

“Having Mike at Harvard for the program is incredible. He can make every single one of us a better player,” said co-captain Jason Michas, a junior from New York City. “But the games after break will really test us as a team.”

Guruge cites strong team chemistry for both the men’s and women’s successes. “All the coaches say our chemistry is awesome,” she said. “We all really like each other, and we have really good players in Haley Mendez and Amanda Sobhy.”

Sobhy is a key for the women. “She’s a phenomenal player. She plays with the boys, and is the No. 1-ranked junior player in the world,” said co-captain Cece Cortes, who was undefeated as a player last season.

Cortes has been out injured this year with a torn hip labrum and strained hamstring. “I’ve been giving it a lot of TLC and rest,” said Cortes, who expects to return to the court come January. “I really thought we had a chance last year, but our chances are greater now to have an even better team.”

A Cambridge native and senior English concentrator, Cortes said that usually it’s the luck of the draw when it comes to compatible personalities on the team. “But the men’s and women’s teams get along really well,” she said. “That on- and off-court dynamic will really help us in the end.”

As for the men, their ace is Ali Farag, a sophomore from Cairo, who is also the top-ranked junior player in the world. Farag and Sobhy are currently clearing eligibility, a league requirement after participating in high-profile tournaments.

After winter break, the men’s and women’s teams take on the University of Pennsylvania on Jan. 14, and a succession of other powerful teams, including Princeton, Yale, and powerhouse Trinity.

“We don’t feel intimidated. We have the utmost respect for our competition,” said Way, who will put the teams through a weeklong training clinic before resuming play. “We’ve got to take care of all the little things — nutrition, rest and recovery, hydration. Those little things tip the balance. They’ve got to come back fit.”

“Our goals this year are realistic. We just want to win an Ivy title, and then the national title,” said Ahmed.

“I’m excited to play the more difficult teams. We’ve been training really hard,” said Guruge. “I’m excited to be pushed, to feel that excitement, that nervousness.”