A quarter-century, and still going strong 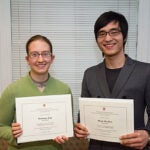 After 25 years on the job as a mailroom staff assistant, Roger Joujoute has become a guardian angel of the Harvard Kennedy School — and he has just the story to prove it.

Back in the ’90s, when he worked on the second floor of the Littauer Building, Joujoute developed a system for signaling to busy mail carriers standing on the ground level. If the mailroom needed a package to be picked up, Joujoute would hold up a large sign reading “Yes.” If not, he’d hold up “No.”

One day, however, a student came in and asked if he could have Joujoute’s “Yes” sign. At the start of the school year, the young man explained, he had been standing in the Littauer atrium, asking God for a sign that he’d made the right choice in coming to Harvard.

“Sure enough, he was chatting with people, and he looked up,” Joujoute recalled. “That day, fortunately for him, we had packages.”

Joujoute isn’t the only employee keeping watch over Harvard. In fact, he was just one of 142 faculty and staff honored at the 57th annual 25-Year Recognition Ceremony on Dec. 1 for their long-running commitment to the University. With their combined 3,550 years of service, the newest members of the quarter-century club are the keepers of Harvard’s living legacy.

The honorees dined on a full buffet and open bar, chatted with Faust, and mulled their options for their 25-year gift (a crystal bowl garnered covetous looks, but the traditional engraved rocking chair seemed to be the most popular choice). Some signed up to share their tales with a representative from Harvard Stories, the University’s new video history project.

“Today, for once, it’s all about you,” Mary Ann O’Brien, director of planning and program management for Harvard Human Resources, told the crowd.

The event drew a bit of nostalgia for simpler times. In the years since 1986, complete vacation has become a foreign concept, thanks to constant connectedness wrought by technology, Faust noted.

“Remember those little pink pads that said ‘While you were out’? [Now] you’re never out,” she said to knowing laughter.

But if the times have changed, Harvard has evolved too, she said. It was only in 1989 that the first woman took a seat on the Harvard Corporation. When the honorees began working at Harvard during its 350th year, Prince Charles was the guest of honor at the anniversary celebration.

By contrast, this fall’s 375th celebration was “a raucous, wet, multidimensional celebration … that I think Prince Charles would have found quite alarming,” Faust said wryly.

Harvard has greater gender, ethnic, and international diversity than ever, Faust said, an observation borne out by the mix of faces in the crowd.

“All these changes that you have witnessed; all these changes you have enabled and supported,” she said. “I know that we’ll be depending on you for the next 25 years, and I look forward to celebrating your 50th anniversary.”

Indeed, many of the honorees wondered how time could pass so quickly. Susan St. Martin found her first job at the Harvard School of Dental Medicine (HSDM) via a Boston Globe classified ad, an experience that would likely seem foreign to her younger colleagues. Since then, she said, her co-workers have become a second family.

“We’ve all grown together, watched our children grow up and go to college,” said St. Martin, now a patient services liaison in the teaching practice of HSDM.

Some recalled life-changing moments of their Harvard tenure. Wendy Chandler, a staff assistant in the Office of Community Affairs, called watching South African leader Nelson Mandela speak at Harvard in 1986 when he accepted an honorary degree “the highlight of my career.”

For others, the 25-year milestone conjured bittersweet memories.

“I used to have hair when I started here,” lamented Jaime Moreno, an animal quarters supervisor with FAS Animal Resources, who works at the Bio Labs. Still, when asked how Harvard has changed him, Moreno insisted, “I’m 25 years younger.”

An elementary school teacher in his native El Salvador, Moreno got his Harvard job by chance. His brother was supposed to interview for the position but couldn’t make it.

Handling rats, weasels, and other animals in the lab didn’t phase Moreno — “the work was exciting and different” — but learning to work a desktop did. “I was scared to touch a computer,” he recalled. Over time, Harvard became an important part of his life.

“It’s not just a place to work. It’s also a place to be proud of,” he said. “Where I work is where science begins. Our group helps to make life for humanity better.”

For a moment, it almost seemed as if he’d forgotten Harvard was honoring him, rather than the other way around.

“From the bottom of my heart, I’m grateful,” Moreno said.