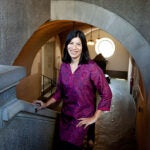 In demonstrating that an RNA nanostructure can be designed as both a drug carrier and as an active therapeutic agent, the Danish Nano Artists took home the grand prize at BIOMOD 2011, the inaugural international biomolecular design competition hosted by the Wyss Institute for Biologically Inspired Engineering at Harvard University. Twenty-one undergraduate teams, representing more than 100 students from around the globe, competed in the event Nov. 5.

The Wyss Institute created BIOMOD with the goal of introducing the next generation of scientists and engineers to bionanotechnology. The teams were challenged to devise projects in which biological molecules were engineered to assemble themselves into nanoscale structures, systems, or machines that could be programmed to perform useful scientific or technological tasks to help address real-world challenges.