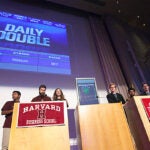 A new chemical process developed by a team of Harvard researchers may increase the utility of positron emission tomography (PET) in creating real-time 3-D images of chemical activity occurring inside the human body.

This new work by Tobias Ritter, associate professor of chemistry and chemical biology, and colleagues holds out the tantalizing possibility of using PET scans to peer into a number of functions inside animals and humans by simplifying the process of using “tracer” molecules to create the 3-D images.

For example, imagine a pharmaceutical company developing new treatments by studying the way “microdoses” of drugs distribute in the bodies of living humans. Imagine researchers using non-invasive tests to study the bio-distribution of drugs aimed at combatting disorders such as Alzheimer’s disease, and identifying physiological differences in the brains of patients suffering from schizophrenia and bipolar disorder.

It may sound like science fiction, but it’s a future that may be closer than most realize.

As described in the Nov. 4 issue of Science, the process is a way of transforming fluoride into an intermediate reagent, which can then be used to introduce a fluorine isotope to organic molecules, creating the PET tracers. Often used in combination with CT scans, PET imaging works by detecting radiation emitted by tracers.

“It’s extremely exciting to us,” Ritter said. “This allows us to now make tracers that would have been very challenging to make using conventional chemistry.”

A major goal for pharmaceutical chemistry has been to develop effective methods to incorporate fluorine atoms into complex molecules. With support provided by Harvard’s Office of Technology Development (OTD) through its Technology Development Accelerator Fund, Ritter developed novel techniques and chemical reagents to facilitate the development of a “late-stage” process that enables fluorination to take place at the end of a compound’s synthesis. Subsequently, OTD drove the formation of a new, venture-backed start-up company created around this platform technology in order to develop it for certain commercial applications. Ritter’s technology has the potential for wide-ranging applications in multiple areas of pharmaceutical science and medicine, including creation of novel therapeutics, as well as imaging agents for diagnosis of disease.  The new technique builds on Ritter’s earlier fluorination work, reducing concerns about the two-hour half-life of the fluorine isotope used for PET.

Ritter’s process begins with fluoride, which is chemically altered to create an intermediate molecule, called an “electrophilic fluorination reagent.” Armed with that reagent, and using the late-stage fluorination process developed in Ritter’s lab, his team is then able to create fluorinated molecules for use in PET imaging.

The technique opens the door to pharmaceutical companies using the relatively simple, noninvasive scans to track how “microdoses” of drugs behave in living subjects, with the potential payoff coming in more efficient and cheaper drug development.

“One of the most immediate applications of this is in using molecular imaging to give us an understanding of the biodistribution of a drug,” Ritter said. “If a pharmaceutical company is developing a drug to treat schizophrenia, they could use this test to see if it enters the brain. If early tests show it doesn’t, they would be able to kill the project before spending a great deal of time and money on it.”