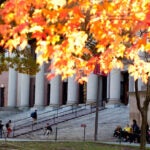 The winners, who were announced on Saturday, receive a scholarship that covers the full cost of two or three years’ study at the University of Oxford.

A Quincy House resident and East Asian Studies concentrator, Galler is writing his thesis on work he did over the summer on nongovernmental organizations and HIV in China, and he hopes to enroll in a Chinese studies program at Oxford.

Already fluent in Mandarin and Spanish, Galler has tutored residents of Boston’s Chinatown in English, has been president and music director of the Harvard Din & Tonics A Cappella group, and business manager of the Harvard VoxJazz group. He also founded a student-run Web design firm and co-founded the Cambridge Chess Academy, an after-school program for students in Greater Boston.

While he is excited to begin his studies at Oxford, Galler also said he feels a responsibility to use his good fortune to improve the world in some way.

“Now that I have this opportunity, it’s a strange feeling of ‘Why me?’ All the other students who were applying and interviewing were so amazing. How do they tell one from the other?” Galler asked. “But the other thing I feel is a renewed sense of responsibility. It’s a great honor, but it’s also a lot of expectations. As a senior, you’re trying to decide what to do next year. You’re looking at jobs or fellowships, but now I have some time to find out what I really want to do. It’s both a space to take a breath but it’s also a strong message that says take this and fight the world’s fight. Do something you love and make a difference.”

For Lenfield, two years at Oxford will mean a chance to continue pursuing his interest in intellectual history, particularly in 19th- and 20th-century Britain and America. The Eliot House resident and history and literature concentrator expects to choose a course of study soon.

“The topic I’m interested in is, broadly speaking, how individuals relate to each other, and on issues of expressive adequacy,” Lenfield said. “It explores questions of what can language, or any expressive system, fully communicate and what limits does that impose on how we can understand one another.

“These are questions that are addressed in many different disciplines,” he continued. “In this era, you have the birth of linguistics as a discipline. It also arises in psychology and sociology, but also in literature and in areas like logic and computer science. All these different fields have developed an interest in these same kinds of problems, and I’m interested in why that is.”

Despite a resume that includes winning the John Harvard Scholarship, the Harvard College Detur Prize, and twice the Oliver-Dabney Prize in History and Literature (as a sophomore and junior), Lenfield said the idea of attending Oxford for the next two years still hadn’t sunk in. Luckily, however, he’ll have a Harvard friend — Rosenberg — along for the journey.

“I don’t think I would have made it, emotionally, through this process without her support,” he said. “We actually had an agreement that, for better or worse, we were going to let each other know how it turned out. I got a call from her and she said, ‘We’re done with the interviews, and I won!’ In the middle of that excitement, I somehow didn’t manage to communicate to her that I had won too. It wasn’t until an hour later, when I called her back and she said, ‘How did it turn out for you?’ that I told her. When we got back to campus, we went out to dinner last night with some friends and split a bottle of champagne.”

“The opportunity study at Oxford is just incredible, and really overwhelming right now,” said Rosenberg. “One reason I came to Harvard is because there are unparalleled opportunities here, not only in academics, but in everything you do here.

“I spend a lot of my time now singing with a choir dedicated to black creativity and spirituality,” she continued. “We’ve sung for Ted Kennedy. We sang with Bobby McFerrin. There are things that happen at Harvard that just wouldn’t happen anywhere else.”

In her time at Harvard, Rosenberg has served as a research assistant to noted Professor Niall Ferguson at the Weatherhead Center for International Affairs, written for Harvard Magazine and the New York Times, and launched her own satirical blog, “Notes from a Mockracker.”

The Cabot House resident and history concentrator is hoping to pursue international relations while at Oxford, a continuation of her current work examining the Cold War. As part of her thesis, Rosenberg is examining a 1956 study commissioned by political leader and philanthropist Nelson Rockefeller that gathered 108 intellectual luminaries in an effort to diagnose the big problems facing the country over the following 10 to 15 years, and the broad national goals that should be adopted to remedy them.

“I’m looking at it as a fascinating intellectual exercise, but also examining Rockefeller himself,” Rosenberg said. “Nelson Rockefeller is often characterized as the man who would be president or as a punchline. I’m looking at his motivation for why he commissioned such a study.”

Rosenberg also offered thanks to the staff of Cabot House, who supported her throughout the months-long Rhodes process.

“Cabot House has been incredible,” she said. “They assigned me a fellowships tutor, Tarun, who is my new hero. They have been behind me every step of the way, helping read over drafts of my proposal, calming me down when I got really anxious about it. They even organized a mock interview for me. I can’t say enough nice things about Cabot and the people there.”

Yang said he hopes to pursue a degree through Oxford’s new master of public policy program, an interdisciplinary one that melds disparate fields such as economics, law, philosophy, and the humanities to examine policy issues.

Yang has broad experience, ranging from offering private piano lessons to Boston-area students to teaching English in Bulgaria to working for a nongovernmental organization in South Africa on AIDS to authoring a study on disconnected youth and pathways to workforce development for the Institute for Youth, Education and Families.

“It’s very innovative, and because I feel like I’m interested in a wide variety of fields, academically, doing something that breaks down the boundaries between disciplines will be very valuable,” Yang said.

At present, the Winthrop House resident and history of science concentrator is focusing on public health issues late in the 20th century, and the political mobilization of marginalized communities. For his senior thesis, he is re-writing the traditional history of AIDS activism to include people of color, as well as marginalized communities, like homeless and intravenous drug users, both of which played large roles in bringing AIDS into the national consciousness.

Though he is still somewhat overwhelmed by winning a Rhodes, Yang chalked up a large measure of the credit for his success to his family, friends, and mentors who have supported him over the years.

“I attribute a lot of it to luck, but more than luck I think this gift is more a recognition and testament to the amount of love and support and faith that my family, especially my parents, have given me,” he said. “My friends — from grade school through college — have been instrumental in getting me through the hard times, and I’ve had the good fortune to be surrounded by many mentors, who have always been there for me. And more than anything else, I just want to thank them for believing so much in me.”