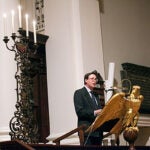 A theology of culture

It was a move that fundamentally changed the nature of U.S.-China relations and ushered in a vital new era of diplomacy and international development.

In 1972, President Richard Nixon traveled to the People’s Republic of China to meet with Chairman Mao Zedong. Pundits largely agree that while nothing extraordinary happened during the ceremonial trip, the visit amounted to a diplomatic revolution, ending 25 years of isolation between the two countries.

For unconventional theater director Peter Sellars ’80, it was a story destined for the stage.

On Tuesday, Sellars, along with musician and composer John Adams ’69, A.M. ’72, and poet and librettist Alice Goodman ’80, reconnected at the American Repertory Theater (A.R.T.) to discuss their 1987 groundbreaking work “Nixon in China,” an opera based on the famous visit.

Harvard President Drew Faust moderated the afternoon conversation, which is part of a yearlong series of events marking the University’s 375th anniversary.

As part of Harvard’s engagement with the arts, the discussion offered an important way to bring some distinguished alumni back to campus to share insight from their lives and accomplishments, said Faust, “and to have all of us be able to celebrate their connections to Harvard.”

“ ‘Nixon’ was for us an anti-opera. None of us were opera insiders,” said Sellars, who first floated the idea of creating a work based on the visit with his friend Adams. But the contemporary composer was wary of the subject matter, worried there was no way to write about the president without taking a satirical approach.

“I didn’t think that it would be possible to write an opera about Richard Nixon that wasn’t in the tonality of late-night TV stand-up comics,” Adams told the crowd.

But though the work was ultimately infused with humor, poking fun at both Nixon and the notion of grand opera, it also captured a profound humanity, exploring the emotional depths of its characters and the mythic status of the visit. It was the perfect story, said the composer, because it addressed a critical point in history, a coming together of two nations who saw the world in fundamentally different ways, one based on a market economy and the other a social welfare state.

Adams, who went on to tackle another moment in history with his next opera, “The Death of Klinghoffer,” which recounts the 1985 murder of an American Jew by Palestinian terrorists, said he was thankful to have taken a chance with Sellars.

“I am so glad we did ‘Nixon in China’ because, as is the case with the opera that followed it … each time these operas come back and are produced somewhere in the world, the world manages to change enough to make the opera seem even more relevant.

Though reviews of the original production were decidedly mixed, and in the years that followed some critics argued that the opera had largely disappeared from the public cultural consciousness, the production, which pushed the theatrical and musical limits of conventional opera, has had a lasting impact. It finally made it to the grand dame of opera houses, the Metropolitan Opera, in February, a rite of passage for any work destined for the operatic canon. Faust called the work iconic.

“This is now for the ages, this opera,” Faust said.

Diane Paulus, the artistic director of the A.R.T. who introduced the discussion, said “Nixon in China” was “an inspiration to a whole generation of us who believed opera could be great theater.”

Sitting on the same stage where he first directed a production for the nascent A.R.T. in 1980 as an undergraduate, Sellars mused about the vital importance of art making and finding one’s own creative path.

He attended Harvard, he said, specifically because there was no theater department, arguing that the art form doesn’t truly belong within an institutional confine. Instead, Sellars said he took chances at Harvard, collaborating with students, working with the A.R.T. and charting his own theatrical course.

“You will never see the world as clearly as you see it right now,” said Sellars, who urged the undergraduates in the audience to welcome failure. “If you avoid risk, you are actually avoiding your own life.”

Goodman said her artistic days at Harvard gave her “a sense that you could do it, that you should do it, and that it was worth taking the risk on. Harvard gave me that, and gave me friends to talk about it with.”

Adams lauded Harvard’s administration for its widening embrace of the arts. “The arts and the kind of practicality of the arts are beginning to be honored,” he said, “and I think that’s a wonderful thing.”