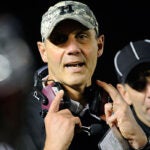 Under a blazing fall sun, against a backdrop of green grass and gold-touched trees, Allston’s Library Park received a new name in a Nov. 5 ceremony honoring one of the neighborhood’s most active and respected residents.

The park was created on the one-time site of a concrete plant through a partnership among Harvard University, the Boston Redevelopment Authority, the Boston Parks & Recreation Department, the Boston Public Library, and members of the Allston-Brighton community.

“I just wanted to say how excited Harvard is to invest in creating this park and to bring a world-class architect to a world-class community vision and now, today, to have it named on behalf of a world-class community leader,” said Christine Heenan, vice president for Harvard Public Affairs & Communications, just before Mellone was introduced to a cheering crowd of about 100 people. “On behalf of the entire Harvard community, it’s an honor to be here and to be part of this park,” she said.

Mellone, a native of Brighton and a Korean War veteran who served for three mayors on the Rent Control Board, the Transportation Department, and other Boston agencies, choked up when he expressed his appreciation. “I don’t think I’m the only one who ever did anything for the community; unfortunately there are not more parks to dedicate to individuals,” he said, as his wife, Barbara, looked on.

Menino praised Mellone’s long commitment to public service, saying, “I think he has been part of every task force that has ever been created in Allston and Brighton.” Menino singled out Mellone’s thoughtful style: “It’s not just what Ray has done, it’s how he does it. … Ray is always respectful even in the most heated debates and he never ever would embarrass you; he would say, ‘Mayor, let’s talk about this,’ or ‘City councilor, let’s figure this out.’”

Facing Mellone, Menino said, “I am happy that future generations will know how much we respected you for making this park, this neighborhood, what it is today.”

“It would be impossible to stand here and talk about all the things that Ray has done over the past 50 years,” he said.

The park, which opened in July, was built by Harvard on 1.74 acres of vacant land that was once part of the original Charles River marshland, and later the site of the McNamara Concrete Co. The land, donated by Harvard to Boston, has been transformed into an oasis of open space, with plantings, rosebushes, a hill, winding paths, benches, and a dramatic misting fountain built with three large granite lion heads, salvaged from a business on Western Avenue.

The naming ceremony was a joyous occasion for 82-year-old Rita DiGesse, who played in the vacant land as a child and who later complained to the Environmental Protection Agency about the dust from the closed cement plant. When the park was first proposed, “I stood up and said they could build it upside down and it would be better than what’s here,” she said. “Now they couldn’t have made it any better. It’s absolutely wonderful.”

Mellone’s service to the community includes leading the board of directors for the Vocational Advancement Center in Brighton, chairing the Allston-Brighton Planning and Zoning Advisory Committee, and representing Allston-Brighton on several local task forces, including, as chairman, the Harvard Allston Task Force since its inception.