‘House, Home’ and the spaces between 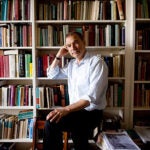 As the Thanksgiving holiday approaches, a new art show at the Student Organization Center at Hilles (SOCH) Penthouse Gallery not only explores concepts of house and home, but homelessness as well.

Student curator Kristen Cronon ’12, who coordinates the SOCH art spaces, said it was important to incorporate the question of homelessness into the “House, Home” exhibit, and display art from St. Francis House artists alongside student works. Sponsored by SOCH in collaboration with the Massachusetts Housing and Shelter Alliance (MHSA), all proceeds of student art will go to MHSA.

“We wanted to plan a show with an advocacy component that would engage a broader audience than just student artists and art enthusiasts,” Cronon said. “The idea is to present a variety of artworks about the idea of home and the people, things, and sense of place that make homes what they are. The St. Francis House artists, whose art will be displayed, add a lot of richness to the discussion, and we’re so excited to bring their talent and energy to the show.”

At a recent reception for the show, St. Francis House artist Efon Elad, originally from Cameroon, spoke to the crowd about his journey. “Every time I took a path, there was an abrupt end to that path,” he said. “After realizing one of my greatest ambitions, which was to come to the U.S., I worked several jobs, some of them quite lucrative.”

But Elad’s life took “different turns,” resulting in the loss of his employment and income. After about seven years, Elad said, he “came to the St. Francis House and saw people doing art. It was exhilarating. I started painting and have not stopped, and I realized that all the turns I have taken in my life have culminated in my becoming an artist.”

Other artists, such as Katie Gallogly-Swan ’13, reflected on the deliberate decision to leave home. Gallogly-Swan spent two years studying at Harvard before traveling the world for a year, hitchhiking across Europe, traveling through Asia and even working in Australia. Her contribution to the art show is an interactive mixed-media piece consisting of the suitcase she used for her travel and mementos of her trip.

“Since I was traveling for a year, I had to choose what to bring with me,” Gallogly-Swan said. “I took practical things like books, water, and sunscreen, but along the way I also collected things such as brochures and hitchhiking signs I made, and of course I took pictures of my family. Sometimes the only way I could keep traveling was having those pictures with me, and knowing that one day I would go home again.”

The art exhibit at SOCH, located in the Penthouse Gallery at 59 Shepard St. in Cambridge, is open to the general public and will run through Dec. 15.