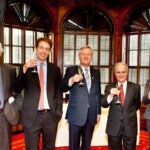 Tim Murphy, the Thomas Stephenson Family Head Coach for Harvard Football, became the School’s all-time winningest football coach as his Crimson cruised past Columbia, 35-21, Saturday at Lawrence Wien Stadium. Murphy surpassed Joe Restic’s mark of 117 career wins and heads into the Penn game with an all-time record of 118-58 in his 18th season with the program.

Harvard won its seventh-straight in moving to 7-1 overall and 5-0 in the Ivy League. Columbia remains winless at 0-8, 0-5 Ivy.

The win also marks Harvard’s 11th-straight season compiling at least seven wins. The Crimson is the only team in the history of the Ivy League to have put together 11 straight seven-win seasons.