Anita Hill looks back, and ahead 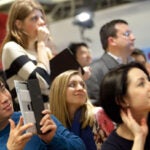 Professor focuses on import of equality in home lives

She was at Harvard to discuss the themes in her new book, but audience members couldn’t resist the chance to engage with the author about her time at the center of a national political firestorm.

Several thanked her for her efforts. One said she “spoke truth to power.”

When asked whether she would consider a position on the U.S. Supreme Court, instead of sidestepping the question, Anita Hill offered a refreshingly candid response. “Wouldn’t that be awkward,” she told the full house at the Radcliffe Gymnasium on Nov. 17, later adding, “It would be hard for me to give up the opportunity to do the work I am doing now.”

During the confirmation hearings of Supreme Court nominee Clarence Thomas in 1991, Hill, a young law professor at the time, accused Thomas of sexual harassment. He eventually was confirmed to the office. But her testimony sparked a national dialogue, created a “new awareness of gender discrimination in the workplace,” and brought the topic “sensationally into the open,” said Nancy Cott, Carl and Lily Pforzheimer Foundation Director of the Schlesinger Library.

Now a professor of social policy, law, and women’s studies at Brandeis University, Hill said her current work has been largely shaped by what followed her earlier experience. In the years after the hearings, she received thousands of letters from people detailing their own experiences with discrimination or harassment. Those stories in large part encouraged her to redirect her approach to civil rights work “through the lens of people who had experienced profound inequality.”

Her new book, “Reimagining Equality: Stories of Gender, Race, and Finding Home,” does just that, probing the importance of the concept of home as a central element for the search for gender and racial equality through personal stories and anecdotes. In the work, she traces a 100-year search for the American Dream, beginning with her own family (her great-grandparents and her maternal grandfather were born into slavery), and ending with the subprime mortgage meltdown.

A dominant notion of freedom for African-American women in the late 19th century was embodied in their desire to have a physical home beyond the shadows of slavery — to move, Hill said, “from being property to owning property.”

That desire was later transferred to the developing urban areas of the 1930s, as African-American men and women pursued jobs, greater equality, and freedom within city limits. Later, the search for equality involved an attempt to move to the suburbs in the 1950s, and transitions into larger homes in the 1980s and beyond.

But along the way, policies and perceptions have hampered the search for true equality in the home, said Hill. Even as women were breaking the bonds of slavery, they were still unable to own property in their name. After migrating to cities, African Americans lived in cramped spaces referred to by author Isabel Wilkerson as “virtual slave cabins stacked on top of one another,” and many worked in service jobs in the upscale homes of whites. In the 1950s, most suburbs, said Hill, were racially restricted, in large part owing to government policies.

Popular culture of the 1980s began to symbolize equality through television shows like the sitcom ‘The Jeffersons,’ ” said Hill. But instead of offering a notion of equality as represented by a move toward community, a struggle to understand each others’ differences, and a final coming together — like the story told in Lorraine Hansberry’s famous play “A Raisin in the Sun,” about a black family’s experience in a subdivision of Chicago — “equality for the Jeffersons was achieving opulence. It was sort of setting yourself apart from others.”

Today, Hill argued, equality in the home requires a close examination of the decisions that need to be made to ensure people can enjoy a dwelling where they can “safely view the world … and enjoy all the opportunities that society has to offer,” including access to good schools, healthy food, and safe streets.

It also requires the type of public engagement that followed the explosive 1991 hearing.

“What moved things, what changed harassment in the workplace, was the public engagement with it and the public reaction,” Hill said. “If we begin to start to engage with some of these issues around home … then I believe we could start to change.”