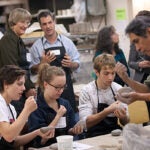 Soul-searching, silliness, and Schubert at the A.R.T.

In the darkest, cruelest depth of winter, a frozen landscape accosts your splintered heart that was broken by a maiden who found love in the arms of another. Misery is your only companion as you wander aimlessly in the cold. So what do you do?

Naturally, you break into song about it.

Or so decided Franz Schubert, the 19th-century Austrian composer who set his bleak and moving 24-song cycle “Winterreise” (“Winter Journey”) to poems about lost love by German poet Wilhelm Müller. The words and music add up to an unabashed, unrelenting tribute to grief.

But the forlorn and sufferers from seasonal affective disorder can take heart. The American Repertory Theater  (A.R.T.) is offering a bright twist on Schubert’s solemn composition with its production of “Three Pianos.”

In the hands of a trio of talented actor-musicians, Schubert’s work is transformed into both a silly and soul-searching house party with, as its title suggests, three pianos, and the audience as guests. With the songs sung in English, German, and occasionally a “bad English translation of German,” according to co-creator Rick Burkhardt, the production captures a passion for the music and connects to its melancholy message using both humor and heartache.

“We were tempted to do the things we normally do, which is be amusing and sometimes lighthearted,” said Burkhardt. “But the piece also insists that we hold on to the mood — it’s a radical piece even for today. We kept getting pushed by the music in directions that were sometimes uncomfortable … it made us think about our own histories of heartbreak.”

Schubert, who died at age 31, found little critical success during his short life. Much of the buzz generated around his work was the result of a committed cadre of friends who attended regular “Schubertiads,” festive events held in private homes to celebrate, perform, and promote Schubert’s music.

It was in the spirit of those informal soirees that Burkhardt and collaborators Alec Duffy and Dave Malloy began to envision “Three Pianos” on a bitter February evening in New York City. During a party in a church, the three stumbled across copies of the somber Schubert song cycle in the choir loft. The accomplished musicians took turns singing and playing the first songs in the series on a nearby grand piano. Soon, others at the party joined in to harmonize or listen and enjoy. Before the night was out they had played through the entire work.

“We realized when we were done that we had just enacted inadvertently a Schubertiad,” said Burkhardt. “And we realized we had the potential to give that extraordinary experience to an audience.”

Throughout “Three Pianos,” the actors adopt the personas of Schubert’s friends and of the composer. They also play themselves, re-enacting their own arguments about the music and discussing the history of the work. The show comes complete with wine for interested audience members, and imaginative jazz, rock, and other interpretations of Schubert’s songs, in an effort, said Burkhardt “to give people access to this music.”

The group spent time in Vienna in 2009, visiting the homes where the composer was born and died, and some of the halls where his music was played.  Later, they read his diaries and letters and those of his contemporaries.

They found that “Winterreise” was in direct opposition to the popular romantic music of the day. Instead of being “florid and beautiful,” Schubert’s sparse and slow-paced composition was written largely in minor keys. But the poets whose work he set to music loved it.

“In our research, we came across several examples of poets saying ‘I only learned what my poem meant when I heard the setting of it,’ ” said Burkhardt. “That is a rather remarkable thing.”

With their new interpretation, Burkhardt and his co-creators hope to accomplish something similar by helping audiences connect with the work on a deeper emotional level.

“There is a history of using art and song in particular to access emotions within you that are difficult to deal with … that’s a rich history and a history that I think all of us have tapped into at some point, and I think it’s good to see what comes from publicly acknowledging that.”