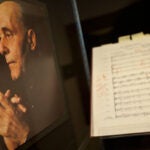 Greenblatt shows how heretical ideas survived from the Roman era

Harvard literary scholar Stephen Greenblatt has proposed a sort of metaphor for how the world became modern. An ancient Roman poem, lost for 1,000 years, was recovered in 1417. Its presciently modern ideas — that the world is made of atoms, that there is no life after death, and that there is no purpose to creation beyond pleasure — dropped like an atomic bomb on the fixedly Christian culture of Western Europe.

But this poem’s radical and transformative ideas survived what could have been a full-blown campaign against it, said Greenblatt in an Oct. 26 lecture. One reason is that it was art. A tract would have drawn the critical attention of the authorities, who during the Renaissance still hewed to Augustine’s notion that Christian beliefs were “unshakeable, unchangeable, coherent.”

The ancient poem that contained such explosive ideas, and that packaged them so pleasingly, was “On the Nature of Things” (“De Rerum Natura”) by Roman poet and philosopher Titus Lucretius Carus, who died five decades before the start of the Christian era. Its intent was to counter the fear of death and the fear of the supernatural. Lucretius rendered into poetry the ideas of Epicurus, a Greek philosopher who had died some 200 years earlier. Both men embraced a core idea: that life was about the pursuit of pleasure and the avoidance of pain.

“The return of this poem is the Renaissance at its most radical,” said Greenblatt, who is Cogan University Professor of the Humanities and the author of “The Swerve: How the World Became Modern” (Norton, 2011). His crowded lecture, “Aesthetic Toleration: Lucretius and the Survival of Unacceptable Ideas,” was delivered at the Barker Center and was sponsored by the Mahindra Humanities Center at Harvard. (Respondents to the lecture were Ann Blair, Henry Charles Lea Professor of History, and Robert Darnton, Carl H. Pforzheimer University Professor.)

Among the most stunning ideas Lucretius promoted in his poem was that the world is made of atoms, imperishable bits of matter he called “seeds.” All the rest was void — nothingness. Atoms never disappeared, but were material grist for the world’s ceaseless change, without any creator or design or afterlife.

These ideas, “drawn from a defunct pagan past,” were intolerable in 15th-century Europe, said Greenblatt, so much so that for the next 200 years they had to survive every “formal and informal mechanism of aversion and repression” of the age.

“A few wild exceptions” embraced this pagan past explicitly, said Greenblatt, including Dominican friar Giordano Bruno, whose “fatal public advocacy” of Lucretius came to an end in 1600. Branded a pantheist, he was imprisoned, tortured, and burned at the stake.

But the poem itself, a repository of intolerable ideas, was allowed to circulate. How was this so?

— Reading strategies. In the spirit of commonplace books, readers of that era focused on individual passages rather than larger (and disturbing) meanings. Readers preferred to see the poem as a primer on Latin and Greek grammar, philology, natural history, and Roman culture.

— Scholarship. Official commentaries on the text were not intended to revive the radical ideas of Lucretius, but to put the language and imagery of a “dead work” in context, “a homeostatic survival,” said Greenblatt, “to make the corpse accessible.” He showed an image from a 1511 scholarly edition of the poem, in which single lines on each page lay “like a cadaver on a table,” surrounded by elaborate scholarly text. But the result was still preservation. “Scholarship,” he said, “is rarely credited properly in the history of toleration.”

— Aesthetics. A 1563 annotated edition of the poem acknowledged that its precepts were alien to Christian belief, but “it is no less a poem.”

“Certainly almost every one of the key principles was an offense to right-thinking Christians,” said Greenblatt. “But the poetry was compellingly, stunningly beautiful.”

Its “immensely seductive form,” he said — the soul of tolerance — helped to make aesthetics the concept that bridged the gap between the Renaissance and the early modern age.

Michel de Montaigne, the 16th-century French nobleman who invented the art of the essay, helped to maintain that aesthetic thread. His work includes almost 100 quotations from Lucretius. It was explicitly aesthetic appreciation of the old Roman, said Greenblatt, despite Montaigne’s own “genial willingness to submit to Christian orthodoxy.”

In the end, Lucretius and the ideas he borrowed from Epicurus survived because of art. “That aesthetic dimension of the ancient work … was the key element in the survival and transmission of what was perceived … by virtually everyone in the world to be intolerable,” said Greenblatt. “The thought police were only rarely called in to investigate works of art.”

One irony abides. Epicurus himself was known to say, “I spit on poetry,” yet his ideas only survive because of it. Lucretius saw his art as “honey smeared around the lip of a cup,” said Greenblatt, “that would enable readers to drink it down.”

The Roman poet thought there was no creator or afterlife, but that “should not bring with it a cold emptiness,” said Greenblatt. “It shouldn’t be only the priests of the world, with their delusions, who could convey to you that feeling of the deepest wonder.”