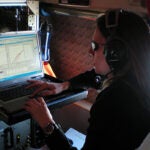 Tracking the pollution amid the remote

In the mid-20th century, psychology was no longer “the science of mental life” (as William James had defined it), but “the science of behavior.” Mentalistic concepts —thoughts, memories, goals, emotions — had been banned as unscientific, replaced by associations between stimuli and responses.

But new ideas about computation, feedback, information, and communication were in the air, and psychologists realized they had enormous potential for a science of mind. Four Harvard scholars used them to launch the “cognitive revolution.”

George Miller noted that people could label, quantify, or remember about seven items at a time, whether they were tones, digits, words, or phrases. That meant the human brain must be constricted by a bottleneck of seven (plus or minus two) units, which Miller called “chunks.”

Linguist Noam Chomsky, while at the Harvard Society of Fellows, noted that people can produce and understand an infinite number of novel sentences. They must have internalized a grammar, or set of rules, rather than having memorized a list of responses. Children are not taught this grammar, and so are equipped with a “language acquisition device” that instantiates a “universal grammar.”

Jerome Bruner co-authored “A Study of Thinking,” which analyzed people as constructive problem-solvers rather than passive media as they mastered new concepts. His colleague Roger Brown analyzed the relationship of concepts to language and initiated a new science of language development in children.

In 1960, Bruner and Miller founded the Harvard Center for Cognitive Studies, which institutionalized the revolution and launched the field of cognitive science. Today the study of the human mind is among the most exciting frontiers of science. Its practical applications include the design of software, the diagnosis of neurological disease, and the formation of public policy, and its theories have revolutionized our understanding of ancient problems such as consciousness, free will, and human nature.