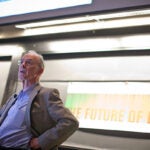 New sources near for biofuels

Scientists from around the world gathered at the Radcliffe Institute for Advanced Study Friday to report on progress and exchange ideas about the advancing science of microscopic motion and the increasing understanding and use of molecules as motors.

The all-day event, held in the Radcliffe Gymnasium, was introduced by Interim Dean Lizabeth Cohen, the Howard Mumford Jones Professor of American Studies, who said the institute is proud of its annual science symposia, which have covered topics ranging from tissue engineering to the origins of life.

The symposium highlights how the institute views itself: as a place that fosters cutting-edge research, as a central meeting site for authorities in many fields, and as a conduit through which that work is shared with the public.

“This year’s symposium epitomizes how the institute sees itself,” Cohen said.

Researchers from such places as Switzerland, California, and Missouri gathered to discuss topics ranging from molecular motors in axonal transport to designing nanobots to how eukaryotic cells move.

Chemistry Professor Ayusman Sen of Pennsylvania State University described several designs for extremely tiny robots that can move on their own. They are controlled using chemical gradients that induce the robots to move. One example uses tiny rods with platinum at one end and gold at the other. In a solution of hydrogen peroxide, the differences between the two metals generate a current, inducing negatively charged electrons to flow from the platinum side to the gold, and positively charged protons to flow in the opposite direction along the surface. Because protons pull on water molecules, that causes the rod to move.

Sen discussed several types of these tiny robots, some that can repel or attract each other, and pointed out that the same action that causes them to move through a liquid could pump that liquid if they were fixed to a single point. That creates the possibility of a new generation of tiny machine parts.

Viola Vogel, professor in the Department of Materials and head of the Lab for Biologically Oriented Materials at the Swiss Federal Institute of Technology Zurich, discussed her work into naturally occurring molecules that operate as motors, such as integrins, which help a cell pull on a substrate. She is also examining the mechanical properties of a molecule called fibronectin, which forms part of the structure of human skin.

“Bacteria may be able to specifically target a wound site because extracellular matrix fibers are relaxed,” Vogel said.