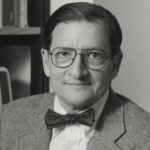 Was leader of Harvard-Radcliffe Orchestra for 45 years

Composer and conductor James Yannatos, who as leader of the Harvard-Radcliffe Orchestra for more than 45 years worked with thousands of young musicians, died at his home in Cambridge on Oct. 19 from complications of cancer. He was 82.

Yannatos was born and educated in New York City. He attended the High School of Music and Art and the Manhattan School of Music. Subsequent studies with Nadia Boulanger, Luigi Dallapiccola, Darius Milhaud, Paul Hindemith, and Philip Bezanson in composition; William Steinberg and Leonard Bernstein in conducting; and Hugo Kortschak and Ivan Galamian on violin took Yannatos to Yale University (B.M., M.M.), the University of Iowa (Ph.D.), Aspen, Tanglewood, and Paris. As a young violinist, he performed in various professional ensembles including a piano trio, string quartet, early music groups with Hindemith and Boulanger, and in the Casals Festival.

In 1964, he was appointed music director of the Harvard-Radcliffe Orchestra, and led that group on tours to Europe, Russia, South America, and Asia. He organized and co-directed the New England Composers Orchestra, the Tanglewood Young Artists Orchestra, and taught conducting at Tanglewood. He appeared as guest conductor-composer at the Aspen, Banff, Tanglewood, Chautauqua, and Saratoga festivals; with the Boston Pops, Winnipeg, Edmonton, Baltimore, and San Antonio symphonies, and the Sverdlovsk, Leningrad, Cleveland, and American Symphony chamber orchestras.

A memorial tribute will be held at 3 p.m. Dec 10 in Harvard’s Sanders Theatre.