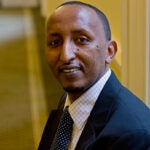 Harold Bolitho was born in Melbourne, Australia, on January 3, 1939.  He received his B.A. from the University of Melbourne in 1961 and his M.A., M.Phil, and Ph.D. degrees from Yale, where he held a number of prestigious fellowships and grants, including a Fulbright Travel Grant and the Mary Cady Tew Prize for Excellence in History.  Hal retained his fondness for Yale during his Harvard years, proudly wearing his Yale gown at each commencement ceremony.

After completing the Ph.D. in 1969, he returned to the University of Melbourne as Senior Lecturer, moving to Monash University in 1973 as Associate Professor.  He pioneered the development of Japanese Studies in Australia, training numerous graduate students and serving as President of the Japanese Studies Association of Australia (1978-80).

Bolitho first taught at Harvard as the Edwin O. Reischauer Visiting Professor in 1983-1984, joining Harvard’s Department of East Asian Languages and Civilizations in 1985.  He taught a variety of courses on Japanese history, including one on the Samurai that enrolled as many as 500 students.  He chaired the department from 1988 to 1989 and again from 1994 to 1996 and served as the Director of the Edwin O. Reischauer Institute of Japanese Studies from 1988 to 1991.

From 1992 until his retirement, Hal chaired the Harvard University Committee on Australian Studies, thus serving as a vital link among the otherwise distant worlds of Japan, Australia, and the United States.  In 1997 he hosted a famous Australian Studies conference, which included among its participants the great Australian Prime Minister Gough Whitlam.  Hal and Chris Wallace-Crabbe edited the conference proceedings, published as Approaching Australia: Papers from the Harvard Australian Studies Symposium, a volume that was described by Bernard Bailyn as “witty, imaginative, and learned.”

Among specialists, Hal was known as an authority on the history of daimyō domains during the Tokugawa period of Japanese history (the seventeenth through the late nineteenth centuries).  In his masterful first book, Treasures among Men: Fudai Daimyō in Tokugawa Japan (1974), he posed the question, “How had the precarious balance between decentralization and centralization been maintained for two and a half centuries after 1600 in Japan?”  This was a key question, for it asked why Japan was able to keep a balance that European feudalism lacked.  His answer was that the “treasures among men,” that is to say, the small circle of inner lords (or fudai daimyō) who served as the top officials in the Tokugawa state was critical.  In every decision they made, they acted with two goals in mind: to restrain the powerful “outside” feudal lords and to maintain daimyō autonomy. Scholars in Japanese studies immediately recognized the importance of his findings, and present-day scholars continue to accept his interpretation.

Even in this early work, Hal wrote with admirable grace and fluency.  In his graduate seminars he told students that he typically revised his articles seven or eight times, and he urged them to do likewise; anything less, he said, produced sloppy or flawed prose.  Known for his distinctive essays on cultural history, on topics ranging from travel and sumo wrestling to reincarnation, he had an unusual ability to carry a reader forward through the interest of the story being told, with the punch-line of an argument deferred.  In his study of a case of metempsychosis (the transmigration of a soul), where a young boy in the early nineteenth century apparently backed up his claim to know the details of his previous life by supplying information only that previous soul could have known, Bolitho told the remarkable tale with zest and amusement; only toward the end did he bring forward the argument he wished to make about the world view of a famous scholar in the national studies school, Hirata Atsutane.

A related hallmark of Bolitho’s writing was, just at the point where the reader was ready to support the “wrong” view, he would turn on a dime and tear apart the foundations of the conventional wisdom he had just put forward.  In his article “Abe Masahiro and the New Japan,” he made the case that Abe, the senior councilor of the Tokugawa government when Commodore Perry arrived to “open Japan,” was a wise compromiser who consulted widely before acceding to Perry’s demands.  Bolitho then turned this argument on its head to show that Abe was in fact a weak leader whose policies doomed the Tokugawa regime.

Bolitho was also a fine and far-ranging book reviewer.  He detested the opaque prose and name-dropping style of the post-modern turn in Japanese studies of the 1990s and 2000s and delighted in skewering the more extravagant works of this genre.  Whether he found a work convincing and valuable or not, his reviews were lively and thorough; they are invariably the best first place to go to get a sense of the work under discussion.

His last book, Bereavement and Consolation: Testimonies from Tokugawa Japan (2003), originated in a chance encounter he had with a Buddhist priest’s moving description of the sudden death of his son.  The rarity of such emotionally charged writing in premodern Japan compelled Hal to translate the account and eventually to build a book around it.  The resulting work generally eschews big conclusions in favor of finely wrought portraits rendered in beautiful prose.

Hal was large and imposing physically, with a fine singing voice.  An accomplished cook and gracious host, he was regularly asked to choose the wine for departmental dinners.  He had two children, Hal and Emily, with his first wife Anne Bevan, from whom he was later divorced.  With his second wife Sharon Ladd, he had a son James, Harvard, Class of 2011.  Hal showed great kindness to his students, especially those from overseas.  They remember many instances of his wry, ironic sense of humor and his consideration for them.  Hal secured his legacy in the field not only through his own scholarship, but also through his mentorship of students, colleagues, and others who sought his guidance.