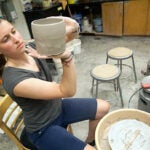 Susan Seav ’12 hails from Los Angeles, and while the molecular and cellular biology concentrator unabashedly admits she’s not a big fan of the country’s eastern side, one activity has alleviated the burden of homesickness a bit — boxing.

“It’s actually a good place to meet boys,” she said.

Seav joined the Harvard Boxing Club, which is open to men and women, during her sophomore year. “I was always leaving volleyball practice at the same time that my friend was showing up for boxing practice,” she recalled. “And he told me I should join.”

Popular on campus since the late 19th century, boxing at Harvard has reinvented itself many times over.

In those halcyon days, the sport was required of every undergraduate, including eventual Presidents Theodore Roosevelt and John F. Kennedy, as well as writer Norman Mailer. In 1941, former lightweight champ Tommy Rawson — and one-time trainer of Rocky Marciano (yes, that Rocky!) – took the helm as coach and oversaw Harvard boxing for six decades until his death in 2003 at age 94.

Rawson witnessed the sport take a lot of punches. In 1961, for instance, the NCAA discontinued boxing as an intercollegiate sport, and so Rawson jump-started the Harvard club. Unruly spectators turned out in droves to see its matches, and a campus-wide ban of tournaments was issued in 1976. When Radcliffe College merged with Harvard College in 1980, Rawson was suddenly faced with coaching both genders.

“Oh, the girls are fantastic!” he told the Gazette in 2001. “They have better footwork and coordination than the men.”

“The reaction I always get is, ‘You box?!’” recalled Allie Stote ’14. “But the guys in the club are really supportive. They always tell me, ‘Oh, I never want to get in the ring with you.’ ”

At practice, women do the same exercises as their male counterparts — 100 reps of sit-ups and push-ups, punching bag drills, and more. “Forget about the boxing aspect for a moment,” said Seav. “A lot of girls join the club just to get a good workout, and to find a buddy who understands the pain.”

Club president George Hageman ’12 has never questioned the presence of women. “They’re full members of the team, and some of them are pretty good — better than the boys, actually.”

Hageman began boxing his sophomore year, too, originally to learn how to defend himself. “But I stayed because boxing pushes you in a way that classes can’t,” said the government concentrator. “Mentally, there’s nothing scarier than going into a ring, and a guy is trying to knock you unconscious. And there’s a special bond that comes from fighting your friends — and knowing you’ll still be friends.”

Boxing is more than uppercuts and jabs, the students agreed.

“It’s an intelligent sport,” said Stote. “You don’t have time to think about what your opponent will do next. You train your mind to pick up on those subtle movements.”

“It’s a good life lesson,” said Hageman. “You take the punch and deal with it.”

But, seriously, what’s it like to get punched in the face?

“You never get used to it,” said Hageman.

“It’s awful,” Seav admitted. “I’ve never gotten hurt, but the punch comes out of nowhere. It kind of feels like falling asleep in class. When you awake, you’re like ‘Oh, wow, that was embarrassing.’ ”