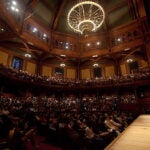 Settling in, stretching out

This year it becomes part of Harvard's 375th anniversary celebration

Under brilliant blue skies, members of the Allston and Cambridge communities watched the Harvard Crimson beat the Bucknell Bisons, 42-3, at Community Football Day.

Harvard Athletics issued almost 1,000 tickets to Allston and Cambridge residents for this year’s annual event on Saturday. Community Football Day gives local residents a chance to watch a game and enjoy a free lunch. Participants could also enter a raffle for gear, tickets, and gift certificates.

“My mom wanted me to come,” said 8-year-old Saheim Jackson of Cambridge. “I’m excited to watch the football game.”

At the community tent, which featured a coloring station and temporary tattoos for kids, brothers Liam, 13, and Aidan, 9, had an opportunity to talk to Harvard President Drew Faust. Speaking about the possibility of going to Harvard, Aidan shared his aspiration to be an artist. “I want to work on art — Lego art — and be a building designer,” he said. Older brother Liam also had high aspirations, albeit in the boardroom rather than an artist’s studio. “I want to be a CEO,” Liam said, realizing that he needs to “go to college so I can get a better job.”

Liam and Aidan’s father voiced his appreciation for Harvard welcoming members of the community to campus. “Being from the Allston-Brighton neighborhood, it helps to have a neighborhood school, Harvard, that opens its doors.”

“Harvard’s tradition of getting together with neighbors to cheer on the Crimson at a fall football game makes for a nice day for everyone, staff and neighbors alike,” said Christine Heenan, vice president of Harvard Public Affairs & Communications. “It is particularly nice when we’re treated to a perfect fall day and a victory on the field,” she added, as was the case Saturday.

While Harvard has held two separate Community Football Days in the past — one for Allston, one for Cambridge — this year, the event was combined as part of the University’s 375th celebration.

Up in the stands, attending his first Community Football Day game, Teddy Hennett basked in the afternoon sun. “It’s just such a nice atmosphere,” he said. “It’s great day to get outside, enjoy a game, and do something different.” While his wife, Frances, retired from the Harvard Law School two years ago, Teddy Hennett never made it to a game before Saturday.

“I just never got a chance to come over here until now,” he said. “But it’s a great day for it.”