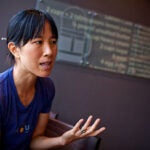 History in the baking

It is 20 minutes before midnight on a balmy September night. Thirty-seven Harvard varsity swimmers and divers stand in a circle on a shadowy brick patio outside Blodgett Pool. The upperclassmen have taught the freshmen the fight song “Ten Thousand Men of Harvard” and the team’s cheer. A few rehearsals are under their belts. The men are milling, joshing, and preparing mentally for the 12:01 a.m. arrival of the competitive swimming season in the Ivy League. Oct. 1 is upon them.

Inside, Blodgett is dark. The stands, the water, the diving tank, all dark. Twelve-hundred empty seats. One light is burning — in the office of coach Tim Murphy. He has a dictionary open on his desk as he prepares to speak to his 2011-12 team. He and assistant coach Kevin Tyrrell have planned the moment, scripted it. They’ve done it before, and they will do it again. It is a tradition for the team to begin its season just after the stroke of midnight on Oct. 1, as soon as the Ivy League allows official swimming workouts to begin.